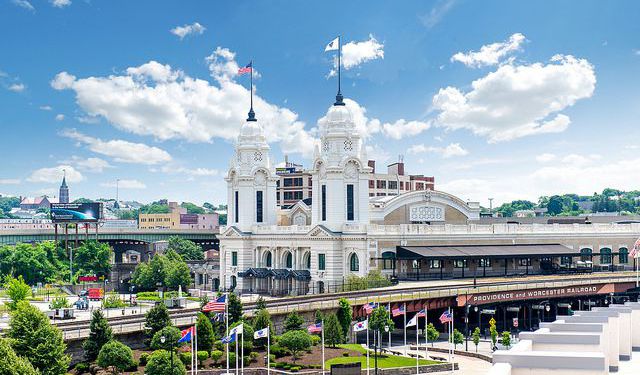 Named after a town in England, Worcester is the second most populous city in New England after Boston. Once commonly referred to as the "Heart of the Commonwealth", due to its location in Central Massachusetts, Worcester is also known as the hometown of the first mass-produced Valentine's Day card. On top of that, the city holds a number of notable attractions, including the Civil War Memorial, Worcester Memorial Auditorium, Worcester Art Museum and more. Follow this orientation walk and explore them in their entirety.
Image Courtesy of Flickr and Destination Worcester.
How it works: Download the app "GPSmyCity: Walks in 1K+ Cities" from iTunes App Store or Google Play to your mobile phone or tablet. The app turns your mobile device into a personal tour guide and its built-in GPS navigation functions guide you from one tour stop to next. The app works offline, so no data plan is needed when traveling abroad.

Worcester City Hall was built by the Norcross brothers at the end of the 19th century, replacing the Old South Meeting house, which was the first town hall. The construction's design was created by Robert Peabody and John Stearns and looks like an Italian palace. Built of blocks of granite, the City Hall preserves the characteristics of the Renaissance Revival style: grand staircases, its cupola, the use of columns, harmonious and elegant forms. The facade is centered by a clock-tower. The City Hall is currently the 4th tallest building in Worcester.
Image Courtesy of Wikimedia and Pmeleski.
Sight description based on Wikipedia.
2

Burnside Fountain is a drinking fountain. Intended to provide fresh water for people, horses and dogs, its pink granite watering trough and pedestal were designed by architect Henry Bacon, who later designed the Lincoln Memorial in Washington, DC. Atop its pedestal sits Boy with a Turtle, a bronze statue of a youth riding a hawksbill sea turtle, created by sculptor Charles Y. Harvey. The statue is affectionately nicknamed "Turtle Boy."

In the tradition of the Manneken Pis in Brussels, "Turtle Boy" is now a mascot for Worcester: a local music contest is named the Turtle Boy Music Award; a local brewer produces Turtle Boy Blueberry Ale, and the Turtle Boy Urban Gardeners, a group of volunteers, maintain the garden surrounding the fountain.

Image Courtesy of Flickr and Joe Shlabotnik.
Sight description based on Wikipedia.
3

Four French-speaking parishes in Worcester merged into a single Catholic church, and with this Notre Dame des Canadiens was founded in 1869 ,in the place where Bancroft Hotel stands today. The church was destroyed by fire in 1908. Founded by Father J.P. Primeau, the present parish was built in 1929 in a Gothic Revival manner. Notre Dame des Canadiens serves as a holy place for prayer in downtown Worcester.
Image Courtesy of Flickr and tomcollinsarc.
4

Situated in Common Park, the Worcester Civil War Memorial was designed by Randolph Roger and dedicated to the soldiers and sailors of the Civil War in 1874. The memorial is a victory bronze statue standing at the top of a high column. The figures around the column symbolize the branches of the military – Artillery, Cavalry, Infantry, Navy – with the whole resting upon a rough granite base flanked by four buried cannons barrels.The monument is approximately 66 ft (20.12 m) tall
Image Courtesy of Wikimedia and Rafaelgarcia.
Sight description based on Wikipedia.
5

Image Courtesy of Wikimedia and Arnold Reinhold.
Sight description based on Wikipedia.
6

Erected in the heart of Worcester's financial quarter, opposite the City Hall, the Sovereign Bank Tower offers the best office space for local business owners. The building has a parking garage and a restaurant attached to it. A glass-walled skyscraper, it is the only 25-story building in Worcester; thus it is the city's most visible construction. Built in 1974 on Main Street, the glass high-rise construction serves as an example of modern architectural achievements.
Image Courtesy of Flickr and sapienssolutions.
7

Image Courtesy of Wikimedia and John Phelan.
Sight description based on Wikipedia.
8

Intended as the residence of the Worcester Woman’s Club, Tuckerman Hall was constructed in 1902 on a lot donated to the Club by Stephen Salisbury III. The building bears the name of Mr. Salisbury's grandmother, Elizabeth Tuckerman. It was designed by Josephine Wright Chapman, one of the most famous architects of the time. The hall serves as a multipurpose venue, housing important community events like concerts, lectures, weddings and musical performances. The construction represents a mixing of stylistic elements taken from Georgian, Federal, and even Greek Revival sources and is considered to be one of New England's architectural treasures because of its symmetrical and elegant aspect.
Image Courtesy of Wikimedia and Daderot.
9

Institute Park is a community resource and a true jewel to the city of Worcester. It is surrounded by a vibrant mix of residential, institutional, and commercial properties. The Park's history as the headwaters of the Blackstone River Corridor, as well as its use for summer concerts and other civic gatherings has allowed thousands of residents from Worcester and the surrounding towns, over the years, to benefit from the Park's tremendous natural attributes.
Image Courtesy of Flickr and Joe Shlabotnik.
11

Worcester Boynton Hall is the main building of the Polytechnic Institute. WPI consistently ranks as a tier-one (top 25%) university according to U.S. News & World Report. The main building was raised in 1865 by the notorious tinware manufacturer, John Boynton. The edifice was designed by Stephen Carpenter Earle, one of Worcester’s most remarkable and creative architects in the nineteenth century. Later, his son, Rear Admiral Ralph Earle, became the president of the Institute and headed it until his death. Boynton Hall is built of pure granite in Gothic revival style.
Image Courtesy of Wikimedia and Nicholas LeCompte.
Sight description based on Wikipedia.
12

Located on Chestnut Street, the Union Congregational Church, also Chestnut Street Congregational, was erected in 1895. It serves now as the city's central worship place and is ruled by New England Dream Center, a local non-profit organization. The members of the worship center are permanently involved in different social projects as well as charitable activities. Designed by the notable architects Stephen C. Earle and C. Fisher in a Gothic Revival style, the church architecture echoes Notre Dame de Paris and makes a great tourist attraction.
Image Courtesy of Wikimedia and John Phelan.
13

13) The Hanover Theatre for the Performing Arts

The Hanover Theatre for the Performing Arts is a 2,300 seat theatre that draws over 197,000 patrons annually with world-class performances and headlining acts including Broadway hits. Theatre as one of the Top Theatres in the World. After nine seasons, the award-winning, historic theatre continues to establish its place as a world-class performing arts venue, acting as a catalyst for the economic development of downtown Worcester.
Image Courtesy of Flickr and jesse.millan.
14

Main street is located in the heart of downtown within walking distance to shopping, fine dining and world-class entertainment including live theater and great nightclubs
Image Courtesy of Wikimedia and en:Image:Worcester,MA,FranklinAndMain-June7,2004.jpg.