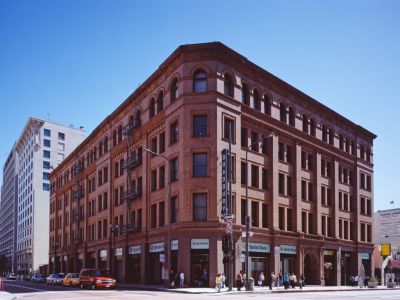 While you are walking along South Broadway, you might pass the Bradbury Building with barely a second glance at its simple Italian Renaissance Revival façade. If you have, turn around and go back, or you will kick yourself later for missing one of the gems of this city.

The exterior isn’t really very interesting, but the interior is quite simply breath-taking. The building, the oldest commercial structure in Los Angeles, was commissioned in 1893 by self-made mining and real estate millionaire, Lewis Bradbury.

Bradbury first approached Sumner Hunt to design it for himself, but he wasn’t pleased with the results. The project was given to Hunt’s draughtsman George Wyman, who had no architectural experience. According to legend, during a séance on an Ouija-board, Wyman’s dead brother told him to take on the project. Wyman was inspired by “Looking Forward”, a book by Edward Bellamy, who gave his idea of how an office building would look in the year 2000.

The five storey interior is centered round a “courtyard”, naturally lit by the glass roof far overhead. This courtyard isn’t particularly wide, but it is amazing, with its pale brick walls and Mexican-tile floor. There are two open-cage elevators with wrought iron gates. At each end of the building, geometric staircases lead to the floor above. The staircases and walkways overlooking the court are a delight of wrought iron filigree and highly polished wood.

The interior has been used as the backdrop of many TV series and films, notably “Blade-Runner”, as a poster on the wall proudly claims. Visitors are welcome, but only to the lobby and the 1st floor. The staff in the lobby are helpful and will give you details about the building, which is now used as private offices.
Image Courtesy of Wikimedia and Balcer.