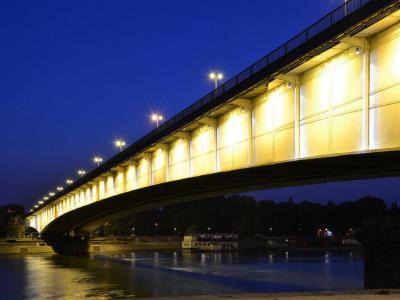 This bridge was built in 1957 to replace the former chain-stayed King Aleksandar I bridge that was opened on December 16, 1934, and blown up in 1941. The new bridge actually uses the lower parts of its predecessor's pylons (decorated by Ivan Meštrović in Serbo-Byzantium style) as outer constraints for its two secondary spans. It has a dual carriageway with three lanes in both directions, and consists of two separate constructions for each direction. The second one was finished in 1979. It is 450 m long, made as a continuous steel box girder, with a central span of 261 m and side spans of 81.5 m each. Nearly 90,000 vehicles cross the bridge daily, and the traffic congestion is frequent. The bridge's name is unofficial and seems to come from a bizarre chain of events. Its official name during the communist rule was "The Brotherhood and Unity Bridge."
Image by Atipiks on Wikimedia under Creative Commons License.
Sight description based on wikipedia