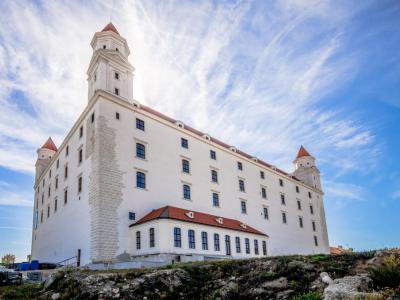 The imposing Bratislava Castle is the most conspicuous landmark in the town of Bratislava. It stands on an isolated rocky hill above the town.

The site of the castle has been of strategic importance for most of the area's history. It is located roughly in the center of Europe. Still, more importantly, it is along the route between the Carpathians and the Alps at a convenient crossing point of the river Danube.

The hill and surrounding area have hosted settlements since before the early Iron Age. Evidence suggests that the first settlements here started around 3,500 BC. In those early centuries, the hill was used as an acropolis for the surrounding town.

Archeological evidence shows a history of Celt and Roman occupation through 500 AD. The current structure was begun in the 10th century but worked lagged over the years. As the need for defense increased for the Kingdom of Hungary, the castle was added on to.

The Kingdom was abolished in 1781, and the castle was more or less dismantled and abandoned. The structures were used as a seminary and military barracks for some time during the 19th century. By the middle part of the 20th century, the castle was in ruins.

The castle is beautifully restored and houses exhibitions from the Slovak National Museum. Even if you choose not to visit the museum and interior rooms, walking around the castle grounds and enjoying the views of the city and the Danube is not to be missed.
Image by Kurayba on Flickr under Creative Commons License.