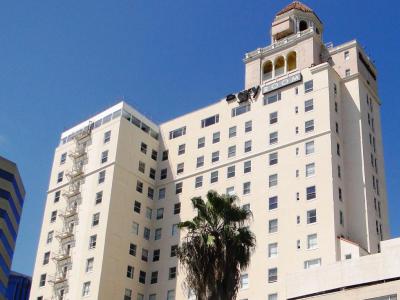 Breakers Hotel is one of Long Beach's most iconic hotels. This building dates back to 1926, when it opened as a resort spa. The 14-story building enjoys Long Beach Historic Landmark status.

In the years immediately following the hotel's opening, the Breakers featured many of the top vaudeville artists of the time as entertainers, as well as a dining room seating 500, a Turkish bath, a rooftop garden, and a barbershop and coffeeshop.

In 1997, the Sky Room, with its 360-degree view, was restored and reopened. The Sky Room Orchestra, a jazz and swing band, has performed at this location, and the Sky Room has had a restaurant.

The Breakers changed ownership in 2017. There are plans underway to restore the building to a 185-room boutique hotel. This building offers excellent photo opportunities.
Image Courtesy of Wikimedia and Los Angeles.