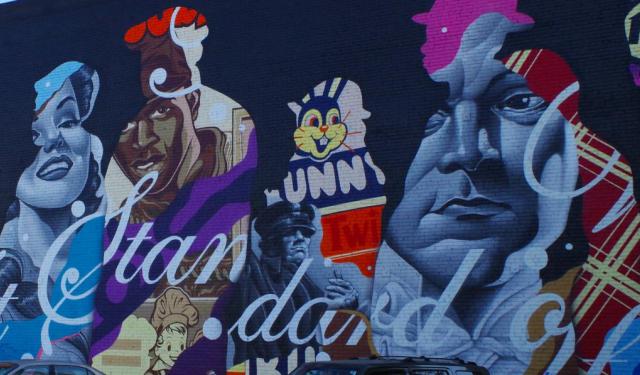 Famous as a coastal resort, Long Beach CA gets pretty hot during summer which, nonetheless, is the season when some people prefer to explore the city's colorful cultural scene, spending much time downtown, checking out the local public art. Long Beach abounds in murals that, over the years, have added a great deal of joyful and inspirational touch to the cityscape. If you're keen on seeing some of Long Beach's best-known murals, take this self-guided walk!
Image Courtesy of Flickr and joey zanotti.
How it works: Download the app "GPSmyCity: Walks in 1K+ Cities" from iTunes App Store or Google Play to your mobile phone or tablet. The app turns your mobile device into a personal tour guide and its built-in GPS navigation functions guide you from one tour stop to next. The app works offline, so no data plan is needed when traveling abroad.

Measuring 38′ in height and 22′ in width, this glazed tile mosaic, titled “Typical Activities of a Beach and Harbor City”, portrays beach recreation in Long Beach. It originally adorned the arched façade of the Municipal Auditorium that was built in 1931 at the foot of Long Beach Boulevard. Upon its completion in 1938, the mural was the largest piece of mosaic artwork created as part of a New Deal era Works Progress Administration project.

When the original structure was demolished in 1979 to build the Terrace Theater, the entire mosaic was saved by a community effort and reinstalled in 1982 as a freestanding piece at its current location at the juncture of the Promenade and Long Beach Plaza, on the south side of the former parking lot which is now part of the City Place Shopping Center. The artists who created it – Stanton MacDonald-Wright, Henry Nord, and Albert Henry King – have designed their signatures into the mosaic border. The site was commemorated as Harvey Milk Promenade Park in 2013.

Inspired by a 1937 photograph by Margaret Bourke-White depicting a group of African American people lined up for a relief from a support station in front of a billboard that reads “World’s Highest Standard of Living”, The American Way mural highlights the ever present inequality in American culture. It was painted for Pow! Wow! by urban artist Tristan Eaton who skillfully combined an array of images in a spray painted collage.

Tristan’s reworking of this chosen imagery analyzes the American Dreams versus the reality of the American Nightmare.

Created by the globally-famous Long Beach street artist Bumblebee, the Deuces mural deals with the theme of “puppy love” which has been a recurring one for this artist. The ginormous piece depicts a reclining kid who's chilling out in the company of his best friend – a hush puppy – resting on his knee, his favorite skateboard at his feet and a smartphone in hand.

Considerate and thoughtful, Bumblebee often addresses in his work the serious issues like child homelessness and impact of modernity upon nature, but in a rather whimsical, playful and colorful way. Using the stenciling technique and mixed media, he puts images of children on the some low-profile walls around the globe. Despite the seriousness of his illustrated topics, all of Bumblebee's creations exude a sense of childish innocence, freedom and love, and are ultimately just a burst of fun.

Felipe Pantone is an Argentinian-Spanish artist whose work is widely regarded as the cutting edge of street art – “looking several light years ahead into the future” – which largely complements the stark modernity of today's cityscapes. Firmly anchored in the present, it features the visual imagery that can only be found in contemporary times, a fusion of bold elements of graphic design with highly evolved geometric shapes, which together produce an ultra-modern aesthetic.

Pantone’s art straddles conventional graffiti, typography and abstraction. His vibrant murals are always dynamic and tensioned compositions which, albeit static in essence, create an illusion of movement if looked at from different angles.
Image Courtesy of Flickr and joey zanotti.
5

Dave Van Patten is a Long Beach/ Los Angeles-based artist whose art is heavily inspired by the 1960s surrealist children’s books, Indy weirdo comics, 1990s SNL humor, and psychedelic album art. Fusing all these influences, he produces visuals that range from dreamlike absurdism, psychedelic surrealism, childlike-storybook simplicity, Socio-political satire, philosophy and spirituality, ethical fables, to disturbingly dark humor. The unifying factor of all these genres is an attempt at humor and underlying conscience. Van Patten's murals are distinguished by clean lines, bright and cohesive color scheme that ultimately feels good on the eyes.

His POW! WOW! mural in Frontenac Ct. alley off Broadway has been inspired by the Beatles’ Sgt. Pepper’s album cover. It is filled with a modern cast of “weirdo characters” including unicorns with mullets, zombie cowboys, a creepy suit man and others. The mural uses graphic shapes and neutral colors.
Image Courtesy of Flickr and joey zanotti.
6

Dragon76 is a Japanese-born artist who lives in New York, and whose dynamic paintings enjoy much acclaim throughout the world these days. The concept of his style – passionate and energetic – is "the coexistence" of two opposites, such as past and future, stillness and motion, evil and justice. Often described as "soul touching", Dragon76's artwork constantly evolves.

One of his street art pieces, painted in 2016, currently adorns the backside of the Edison residential tower in Long Beach, and proves that part of the beauty of the street art lies in the fact that it is ephemeral.
Image Courtesy of Flickr and dianaconnolly101.