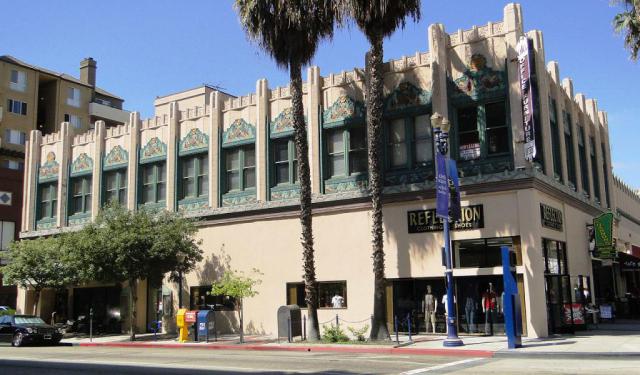 The city of Long Beach, named so by the locals for its long, wide beaches, is also renowned for its architectural diversity. The downtown area is dotted with buildings of different styles, from Greek to Italian to French to Spanish and Art Deco, many of which date back to the late 1800s - early 1900s. This self-guided tour invites you to explore the most prominent historical edifices in the city, including The Willmore, Dr. Rowan Building, Villa Riviera and more, that make up the historical heritage of Long Beach, CA.
Image Courtesy of Wikimedia and Los Angeles.
How it works: Download the app "GPSmyCity: Walks in 1K+ Cities" from iTunes App Store or Google Play to your mobile phone or tablet. The app turns your mobile device into a personal tour guide and its built-in GPS navigation functions guide you from one tour stop to next. The app works offline, so no data plan is needed when traveling abroad.

Breakers Hotel is one of Long Beach's most iconic hotels. This building dates back to 1926, when it opened as a resort spa. The 14-story building enjoys Long Beach Historic Landmark status.

In the years immediately following the hotel's opening, the Breakers featured many of the top vaudeville artists of the time as entertainers, as well as a dining room seating 500, a Turkish bath, a rooftop garden, and a barbershop and coffeeshop.

In 1997, the Sky Room, with its 360-degree view, was restored and reopened. The Sky Room Orchestra, a jazz and swing band, has performed at this location, and the Sky Room has had a restaurant.

The Breakers changed ownership in 2017. There are plans underway to restore the building to a 185-room boutique hotel. This building offers excellent photo opportunities.

The First National Bank building (also known as the Metropolitan Building and the Enloe Building) in Long Beach is listed on the National Register of Historic Places.

The current building, designed by Los Angeles architects Robert F. Train and Robert E. Williams, was built in 1906. The structure was designed in a French Renaissance Revival style utilizing pressed yellow brick on the street sides and common red brick on the remaining two sides. The distinctive clock tower with its six-foot-diameter clock face was added in 1907.

During the 1950s, many of the original decorative elements such as the decorative cornice were removed or covered as part of modernizations efforts. The building was restored to its original look in the 1980s thanks to the federal tax incentives.
Image Courtesy of Wikimedia and Epolk.
Sight description based on Wikipedia.
3

First Congregational Church was founded in 1888. The current building was completed in 1914. It was designed in the Romanesque style by architect H.M. Patterson of Los Angeles and built of red pressed brick laid in patterns and trimmed with white terra cotta. The large auditorium had the capacity for seating 1,500 persons.

The Los Angeles Times wrote that the "immense auditorium, the roof of which is fifty-five feet above the floor, gives one the impression he is entering one of the cathedrals of Europe." The Times also referred to the church’s art-glass windows as being "among the finest to be seen in the West." The church also featured three great rose windows above the gallery and six picture windows below the gallery. The center window was called the "Light of the World."
Image Courtesy of Wikimedia and Los Angeles.
Sight description based on Wikipedia.
4

The Willmore is an 11-story historic landmark in Long Beach. Located at West 3rd Street, the building was completed in 1925 in an L shape with a ten-story west wing and an eleven-story north wing. The building was designed in Italian Renaissance Revival style and was originally home to a luxury apartment hotel. The elegant lobby has high ceilings, classic columns and a beautiful, stately cast stone fireplace.

Initially known as Stillwell, the building was renamed to honor William Willmore, the man who started the city’s development in 1882. Back then the city was known as Willmore City. It wasn't until 1888 the residents of Willmore City renamed their town Long Beach, after after its long, wide sandy beaches, and the incorporated city in the same year.

Nowadays the building houses condominiums, a restaurant situated on the first floor, and a solarium on the top floor with with a sweeping view of downtown Long Beach. The building has been listed on the National Register of Historic Places since May 20, 1999.
Image Courtesy of Wikimedia and Los Angeles.
5

Farmers and Merchants Bank Building is a historic landmark in Long Beach. Built in 1923, it was the city's first skyscraper. The building's architecture is an outstanding example of Italian Renaissance Revival classicism, designed by architects Curlett and Beelman. The main, two-story portion of the building features a red Italian marble entrance, decorated with double doors of brass-plated steel. The interior has been carefully preserved. The ten-story office tower, with an entrance from Pine Avenue, is adorned with relief panels.
Image Courtesy of Wikimedia and Los Angeles.
6

The Dr. Rowan Building takes its name from the first tenant, a dentist named Dr. Rowan, who practiced during the 1930s. This building's architect, Charles W. Pettifer, constructed the building for the Bank of Italy in 1930.

Today, this building stands out as one of the city's most-recognized landmarks. The Art Deco style that was popular at the time of the building's construction helps make the location stand out as an architectural marvel.

Geometric and naturalistic designs, true to the Art Deco style, blend together seamlessly. The ornamentation is multicolored, and the tiles are of the original terra cotta material, which are stunning examples of how distinct this building's style is.

This building is still in use today for commercial purposes. The ground floor is host to several office spaces, as well as retailers.
Image Courtesy of Wikimedia and Los Angeles.
7

Situated at the intersection of Broadway and Linden Avenues (hence the name of the building), the Broadlind Hotel is a four-story historical edifice. Completed in 1928, this historical landmark is a perfect combination of Italian Renaissance architecture and American Midwest style.

The architecture of the Broadlind showcases the Italian Renaissance with its arches, stone columns and braided concrete ornamentation, but at the same time the red brick building also features a style commonly seen in the American Midwest. The wrought iron overhang above the entrance displays a bit of class New Orleans style, while the large wood beam doors have a flavor of Spanish mission architecture in them. What makes Broadlind Hotel special is that it blends the different architectural elements seamlessly together.

Today Broadlind is a luxury boutique hotel, giving visitors to Long Beach an unique opportunity to experience a piece of history in an architectural gem.
Image Courtesy of Wikimedia and Los Angeles.
8

Originally known as the Campbell Apartment Building, Lafayette Complex represents another historical building and landmark of the city, conveniently located between Broadway and First Streets, on Linden Avenue. The Lafayette Complex was built in 1928 and is one of the best examples of Art Deco style in Long Beach. It houses 173 units, including studios, condos, laundry, solarium, common area and a garden courtyard. Its ground floor is home to commercial, trade and gallery space.
Image Courtesy of Wikimedia and Los Angeles.
9

Cooper Arms is a twelve-story steel-reinforced concrete building with exterior walls of brick finished with stucco. The design of the L-shaped apartment building has been described as Renaissance Revival and "Adam Revival" with neo-classical and neo-Egyptian ornamentation. The building's 12th floor solarium and ballroom, occupying a major portion of the top floor, were among its most notable features. The ballroom included a domed ceiling and ornate moldings and lanterns. Another popular feature was the ground-level garden along Ocean Boulevard which opened onto a Spanish loggia extending through the structure to Linden Avenue.

A promotional brochure published in 1922 noted that the Cooper Arms would have the latest amenities, including steam heating, high-speed elevators, "instantaneous hot water at all times," "Iceless Frigidors," "Disappearing beds," and "Dustless roller screens." Cooper Arms was added to the National Register of Historic Places in 2000. It is currently operated as condominiums.
Image Courtesy of Wikimedia and Los Angeles.
Sight description based on Wikipedia.
10

Villa Riviera is a registered historic building on Ocean Boulevard in the Alamitos Beach neighborhood of Long Beach. From the time of its completion in 1929 through the mid-1950s, it was the second-tallest building, and the tallest private building, in Southern California. The 16-story French Gothic building has been called the city's "most elegant landmark" and a building that "has helped define the city." The building was added to the National Register of Historic Places in 1996 and is currently used as condominiums.

Built from 1927-1929 at a cost of $2.75 million, the structure is topped with a steeply pitched copper roof with a green patina. It features fierce-looking gargoyles perched along the ridges of the higher floors. The building was also equipped with luxurious features, including a ballroom, Italianate roof garden, lounges, high-speed elevators, "vacuum-type heating," and a 100-car garage.
Image Courtesy of Wikimedia and Bruce Boehner.
Sight description based on Wikipedia.
11

East Ocean Boulevard is home to several historial landmarks in the city. Among them, St. Regis Building was a luxurious apartment hotel first opened in November 1922. The building harmoniously combines Greek Revival and Renaissance Revival architectural styles. The individual apartments were two to three rooms, including kitchen, bath and dressing rooms.

This elegant structure was designed by Joseph H. Roberts. Today the St. Regis serves as condominiums.
Image Courtesy of Wikimedia and peter boy12qq12.