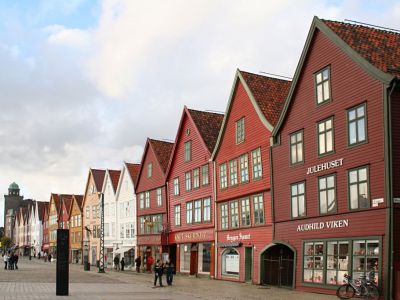 Bryggen (The Wharf), Bergen (must see)

The Bryggen area originally covered all buildings between the sea and the Ovregaten road. The earliest pier is dated to about 1100 AD. The city of Bergen itself dates from before 1070. The existing buildings of Bryggen date no earlier than 1702. This is not surprising in a city so well acquainted with disastrous fires.

The Hanseatic League established itself in Bergen in 1350. They traded mostly cereal grains for stockfish. The town grew into an important center for international trade, and the buildings of Bryggen near the waterfront were, piece by piece, brought under the control of the Hanseatic merchants. The stockfish and the grains had found a home.

From 1702 until 1754 the Hanseatic league buildings were on fire, rebuilt, on fire, demolished, and on fire again. Finally the Hanseatic businesses in Bergen ended and the property at Bryggen was transferred to Norwegian citizens.

Bryggen suffered a fire again in 1955. In an archeological dig that followed, 670 ancient runic inscriptions were discovered carved mostly on pine chips or sticks. For a long time runes were thought to be used only for grave pronouncements or prayers.

These runes however, were concerned with more mundane day-to-day business. Such as: "Ast min, kyss mik." "My darling, kiss me." It is not known if the wish was granted. The inscriptions are at present held in Bryggens Museum in Bergen.

Hiding behind the classic Bryggen facades is a little world of alleyways, shops, galleries and studios. Local artists and designers have taken over the storage spaces for stockfish and grain. The rooms hold art, designs, jewelry, books and, wait for it, a cafe. Artists and designers are hiding in the narrow passeges among the houses.

The local artists want people to think of Bryggen not as some kind of museum where nothing happens, but a living thriving space for art.

Why You Should Visit
To get a feeling of the Hanseatic influence on the city.
Image by Nina Aldin Thune on Wikimedia under Creative Commons License.