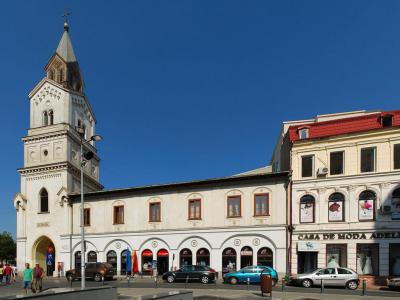 Bărăţia is one of the Roman Catholic churches in Bucharest, Romania. It is located in the heart of the city, on I.C. Brătianu Blvd, next to Piaţa Unirii. Its name, used in antiquated Romanian for several Catholic churches, derives from the Hungarian word of Slavic origin, barát, which means "brother" or "monk".

The history of the church can be traced back to 1314, when Franciscan monks built a wooden church near the early settlements at the location of present-day Bucharest, mainly for Italian merchants travelling to the Byzantine Empire. Bucharest was founded in 1459, and the wooden church has been rebuilt several times since. In 1629-1633, a new stone church was constructed by Franciscan monks from the Province of Bulgaria. In 1716, the Wallachian Prince Ştefan Cantacuzino promised that he would repair it, but unfortunately had to abdicate that same year. Leopold I donated 1,500 golden ducats for the repairs, to which Prince Nicholas Mavrocordatos contributed another 280 ducats, and the work was finished in 1741.

The church burnt down during the 1847 Bucharest fire and its reconstruction, which ended in 1848, was financed by the Imperial House of Vienna, donating 4,000 guilders. The big bell was cast in 1855, being financed by Emperor Franz Joseph I of Austria. During the Communist era, many buildings of the parish were demolished or confiscated by the State. The church underwent a major renovation in 1954.

Today, masses are served three times a day on weekdays and six times on Sunday; including those in the Hungarian and German languages for the local ethnic minorities.
Image Courtesy of Wikimedia and Andrei Stroe.
Sight description based on Wikipedia.