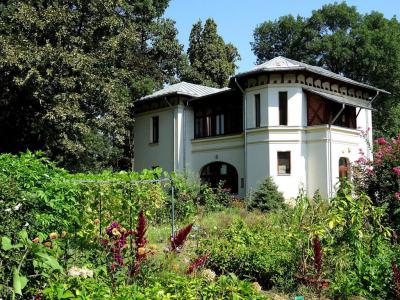 The Bucharest Botanical Garden, now named after its founder Dimitrie Brândză, is located in the Cotroceni neighbourhood of Bucharest. It has a surface of 17.5 hectares (including 4,000 m² of greenhouses), and accommodates more than 10,000 species of plants.

The first botanical garden in Bucharest was founded in 1860, near the Medicine Faculty [presently known as Carol Davila University of Medicine and Pharmacy], by Carol Davila. Its first director was botanist Ulrich Hoffmann, succeeded six years later by Dimitrie Grecescu. The garden was eventually moved to its current location in 1884 by Dimitrie Brândză, a Romanian botanist, assisted by Belgian landscape architect Fuchs. The garden was opened in 1891, after the greenhouses construction was complete. During World War I, the garden was used by German occupation forces and suffered great damage. In World War II it was hit by Anglo-American bombardments.

The garden houses the Botanical Museum located in the Brâncovenesc style building, by the entrance gate; it features more than 5,000 plant species, including 1,000 exotic ones.
Image by Miehs under Creative Commons License.
Sight description based on wikipedia