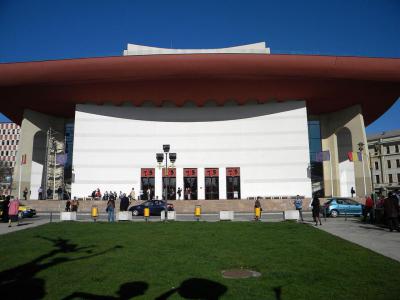 The Bucharest National Theatre is one of the national theatres of Romania, located in the capital city of Bucharest. It was founded as the Teatrul cel Mare din Bucureşti ("The Grand Theatre of Bucharest") in 1852, and its first director was Costache Caragiale. It became a national institution in 1864 by a decree of Prime Minister Mihail Kogălniceanu, and was officially named the National Theatre in 1875. Nowadays, it is administered by the Romanian Ministry of Culture.

In April 1836, the Societatea Filarmonica — a cultural society founded by Ion Heliade Rădulescu and Ion Câmpineanu — bought the Câmpinencii Inn in order to build a National Theatre on its site, upon which they began to collect money and materials for this purpose. The preliminary cost of the project, as per the contractor's report of August 13, 1843, was estimated at 20,300 Austrian guilders (standard gold coins), of which only 13,000 were actually available. In 1846, another contractor company was hired by Viennese architect A. Hefft, who came up with a more affordable plan. The construction got under way in 1848, only to be interrupted in June by the Wallachian revolution. In August 1849, after Prince Barbu Dimitrie Ştirbei took the power, he ordered that the construction be completed.

The edifice was built in a Baroque style, with 338 stalls on the main floor, three levels of loges, a luxurious foyer with staircases of Carrara marble and a large gallery for students who were allowed to attend free of charge. For the first two years, the theatre was lit with tallow lamps, but from 1854 it used rape oil lamps which were later replaced by gaslights and eventually electric lights. In 1875, by which time the theatre had changed its name to Teatrul Naţional, its director became the writer Alexandru Odobescu.

The historic theatre building on Calea Victoriei — now featured on the 100-leu banknote — was destroyed during the Luftwaffe bombardment of Bucharest on August 24, 1944. The current National Theatre is located about half kilometre away from the old site, to the south of the Hotel Intercontinental at Piaţa Universităţii (University Square), and has been in use since 1973.
Image by Julienbzh35 on Wikimedia under Creative Commons License.
Sight description based on wikipedia