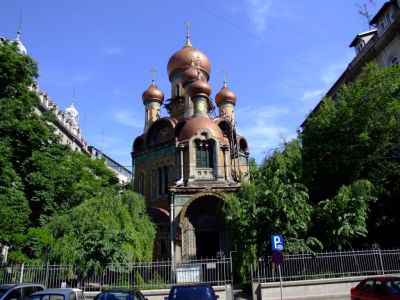 The Russian Church of St. Nicholas is located in central Bucharest, just off University Square. Russian Ambassador Mikhail Nikolaevich Giers commissioned the construction of a Russian Orthodox church in the heart of Bucharest in 1905. It was meant primarily for the use by the legation employees, as well as the Russians who lived in the capital city of the Romanian Kingdom at that time. The Court of Emperor Nicholas II provided funds for the construction.

The building occupies the surface of 350 m² and is made wholly of brick and stone. The seven domes (taking the shape of onion domes) — typical of Russia, but unusual for Romania — were initially covered in gold. The iconostasis was carved in wood and covered with gold, modelled on the Church of Twelve Apostles in the Moscow Kremlin, and was then decorated by the renowned Russian painter Viktor Vasnetsov.

The church was finished in 1909 and was sanctified on November 25, 1909. During World War I, just before the occupation of Bucharest by the Central Powers, it was closed, with all its valuables and archives transported to Iaşi and then farther North-East to Saint Petersburg, where they ultimately vanished in the chaos of the Socialist Revolution of 1917. After the war, physical damage to the building was repaired by the Russian community in Bucharest, and the services resumed in 1921.

After the old Russian priest had died in 1935, the church was transferred under the authority of the Romanian Government, and was designated for the use by students and professors of the University of Bucharest. In 1947, at the request of the Soviet government, the church was once again placed under the Patriarchate of Moscow, which sent in a new Russian priest and provided funds for refurbishment. In 1957, Patriarch Alexius I decided to return the building to the Romanian Orthodox Church, which had it restored once again.

It was re-sanctified in 1967 and in 1992 was again made available for the use by students and professors of the University of Bucharest. Because of its present congregation, the church is now often referred to as Biserica Studenţilor ("The students' church").
Image Courtesy of Wikimedia and CristianChirita.
Sight description based on Wikipedia.