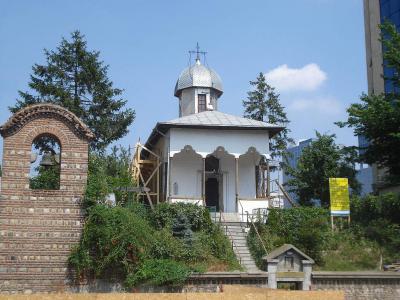 Bucur Church is the church that once served as the chapel for the Radu Voda Monastery. The exact age of the church is not known and has been the subject of much discussion among Romanian historians. For a long time, many historians have insisted that the building features the style specific of the 18th century, while others have held to the legend which claims that the church was built by the shepherd Bucur, whose name is also associated with the name of the city of Bucharest. The church appeared on a map for the first time between 1844 and 1846 under the name of Bucur Church.

In the past, the church was located on the same hill as the Radu Vodă Monastery. In the 18th century the hill was divided into halves to allow the building of a street in the middle. Although the church had been recorded in a number of texts by both Romanian and foreign authors as having been built by the founder of Bucharest, the shepherd Bucur, later researchers have put the time of its construction at the 17th century with further reconstruction in the first half of the 18th. Other researchers have established that the church was built in the first half of the 17th century to serve as the chapel for the Radu Vodă Monastery. There are also opinions that the church was built in 1416 by Mircea cel Batran [the Elder].

In the work titled “The History of the Founding of the city of Bucharest - the Capital of the Kingdom of Romania - from 1330 to 1850" there are many texts which assert the that the church was built by the shepherd Bucur. Until 1974, many of those who had studied the history of the church felt that the builder of the church could not be the shepherd Bucur, as he himself was likely to be a pure legend that first appeared in the book on the Principlaities written by the British Consul William Wilkinson and published in London in 1820.

However, the most recent study has revealed a manuscript written by Catholic Missionary Blasius Kleiner in 1761 that attests to the legend as a true historic fact. In particular, Kleiner wrote, “They say that this city gets its mane from a certain shepherd or, as others say, a famous bandit, who was called Bucur. This man pastured his sheep in the field by the Dambovita River, and maybe there also carried out his banditry. Later, he built a church and began to build a few houses for himself and a few others.”

Entrance to the church is made through a similarly elegant porch, similar to those found in peasant houses in Romania, supported by wooden posts. Above, the building has a cupola with a mushroom-shaped roof. The windows and doors, ornamented with carved stone, were added at the beginning of the 20th century.
Image Courtesy of Wikimedia and Pixi.
Sight description based on Wikipedia.