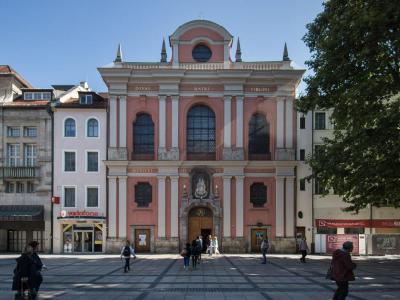 The Bürgersaal or Citizen’s Hall is a small, two-storey, Baroque-style building, located in Neuhauser Strasse towards the north of Marienplatz. Constructed between 1709 and 1710 to the design by Giovanni Antonio Viscardi, it started off as a meeting hall for a group, called the Marian Congregation of Men, affiliated to the Jesuit order. It has been used as a church since 1778.

Nowadays, people come here often to pay homage to the anti-Nazi Jesuit priest, Rupert Mayer, who was later canonized by Pope John Paul II. The shrine of Father Rupert Mayer located in the church is a well known place of pilgrimage. The building was severely damaged during the World War II bombardments with only a handful of the original frescoes survived.

The lower part of the church consists of a low-vaulted hall lined with statues, placed in alcoves, and a small chapel. The best part of the building is the upper floor which houses some beautiful religious artworks. The relief in the altar, Mariae Verkündigung, regarded as a Baroque masterpiece, is the work of sculptor Andreas Faistenberger. Another treasure found here is the sculpture of a guardian angel by Ignaz Günther. Thirteen oil landscape paintings by Franz Joachim Beich, depicting places of pilgrimage in Bavaria, adorn the walls of the upper floor of the Bürgersaal.
Image by Pedro J Pacheco on Wikimedia under Creative Commons License.
Sight description based on wikipedia