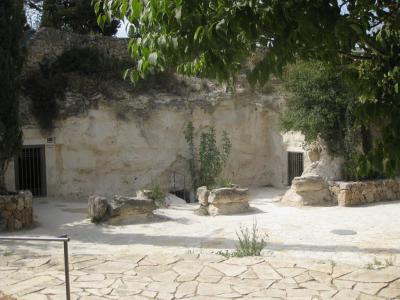 Inside the botanical gardens of the Hebrew University – Mount Scopus Campus, a small set of burial caves have been expertly preserved and are open to the public so that visitors can actually look around the original ossuaries that have not been moved for thousands of years! Far better than seeing them in a museum, rather here you can examine original burial artifacts in their location of discovery, and free of charge.

One of the ossuaries belongs to a Jewish benefactor by the name of Nicanor, known from ancient sources for having donated the gates of the Second Jewish Temple (516BC-70AD). According to lore, these brass gates were being sent by ship from Egypt to Judea when a storm broke out; thus, the crew was forced to cast one of them into the sea. When that proved to be ineffective, the crew decided to toss the second gate out as well. Hearing their plans, Nicanor declared that if they did so, they should cast him out as well. His self-sacrifice called for a miracle and the storm subsided. When the ship docked, the gate cast overboard was miraculously found floating in the harbor. All the Temple's gates were plated with gold save for Nicanor's, as the rabbis wanted the people to see the "miracle gates" in their pristine bronze form. Besides, their brass finish happened to have a special golden hue – or so the Talmud says...

Tip:
Visitors must show ID to enter the university campus.