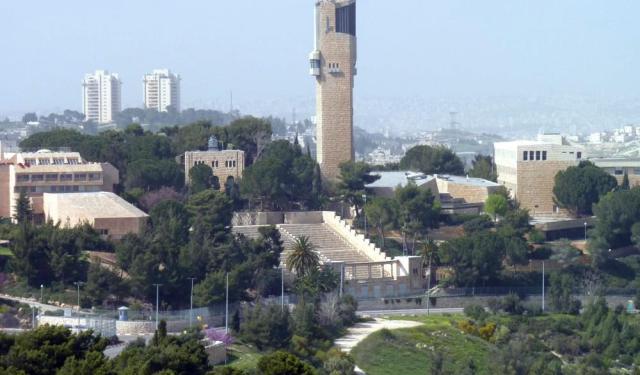 Dotted with many sightseeing places, Mount Scopus – translating as the “Observation Mount” from Greek – is a great place to get views over the whole Old City of Jerusalem on a nice day. The mount has been of major strategic importance since Roman times, with forces setting up camp here prior to laying the siege that culminated in the final Roman victory over Jerusalem around 70 AD. Likewise, the Crusaders camped on the mount in 1099 just before taking the city from the Fatimid Caliphate, as did the British after taking it in 1917 from the Ottoman Empire.

The best time to visit is evening, when the sunset will be just in front of you with a magnificent city-view. Passing through the War Cemetery, you’ll reach the sought-after Hebrew University campus with its botanical garden and amphitheater, the latter affording magnificent views over the Judaean Desert as far as the Mountains of Moab. Elsewhere, the top of Mount Scopus gives a good panoramic view over the Mount of Olives, as well as the ramparts and fortified gates of the Old City, with the Dome of the Rock clearly visible.

Make sure to also check the Augusta Victoria compound with a hospital (East Jerusalem’s largest) and a beautiful church. Those who are fit can climb up the many stairs of the tower and look as far as the Dead Sea.

Follow our self-guided walking tour to have a great time in this magical place!
Image Courtesy of Wikimedia and Grauesel.
How it works: Download the app "GPSmyCity: Walks in 1K+ Cities" from iTunes App Store or Google Play to your mobile phone or tablet. The app turns your mobile device into a personal tour guide and its built-in GPS navigation functions guide you from one tour stop to next. The app works offline, so no data plan is needed when traveling abroad.

The War Cemetery on Mount Scopus is a final resting place for fallen servicemen of the British Commonwealth during the Palestine campaign of 1917. The first real attempt of making a unified approach at burying the dead who had fallen on foreign soil, it contains the graves of 2,515 Commonwealth service personnel (including 100 unidentified), a number of whom were removed from at least 7 other cemeteries in the area where they could not be maintained. Units from Australia, New Zealand, India, Egypt, South Africa and the British West Indies are also represented besides those of the UK. A small number of German and Turkish dead also are buried at the cemetery, and a small Jewish section is near Plot 'N'.

The cemetery also contains the Jerusalem Memorial to 3,300 Commonwealth service personnel who died on operations in the same war in Egypt and Palestine and have no known grave. This Memorial incorporates a chapel with a mosaic that was designed by Robert Anning Bell.

The grounds are immaculately kept and the simple burial stones make the stark reality of war very real. The stones have the name, age and the date of the soldier's death inscribed, along with the unit insignia.

Visitation is free and open to the public 24/7 (just for your consideration, try to visit during the day).

This location is the only "real" campus for the Hebrew University, famous for its cutting-edge research in fields such as medicine and science, and a melting pot for students from all over the world. Cozy and architecturally impressive, with lots of trees and flowers, comfortable park benches, and hidden romantic spots, the campus notably features an amphitheater that gives visitors magnificent views over the Judaean Desert as far as the Mountains of Moab.

The University proper has notoriously tough entrance requirements, but anyone can stroll amongst the buildings and be inspired by the unique skyline. The reasonably priced health club here includes a swimming pool, tennis and squash courts, weight facilities, an aerobic center, plus a spa with steam, sauna and jacuzzi rooms.
Image Courtesy of Wikimedia and Hoshvilim.
3

It's worth the extra climb to the top of Mount Scopus to see the Hebrew University's botanical garden. Founded in the 1920s, it contains a fairly complete collection of almost 1,000 species of wild plants from all over Israel and the Middle East – from lovely bluish-purple orchids to specimens mentioned in the Bible (sesame, saffron, almonds, figs, etc). Some plants are seasonal so one can, on occasion, find a sign with nothing near it, but the place is still alright for studying the flora of the area (be sure to take the brochure or a mobile to check anything about a plant that you are interested in).

The top of Mount Scopus gives a good panoramic view of Jerusalem city: just below and to the left is the Mount of Olives and several important sites (Church of All Nations, Mary's Tomb, and the gold onion-domed Church of Mary Magdalene), while out in front are the ramparts and fortified gates of the Old City with the Dome of the Rock clearly visible. On site are few hammocks for public use, also ancient burial caves dating back to the Second Temple period (1st century AD).

Tip:
Best enjoyed in the springtime when there's a bit more blossom.

Inside the botanical gardens of the Hebrew University – Mount Scopus Campus, a small set of burial caves have been expertly preserved and are open to the public so that visitors can actually look around the original ossuaries that have not been moved for thousands of years! Far better than seeing them in a museum, rather here you can examine original burial artifacts in their location of discovery, and free of charge.

One of the ossuaries belongs to a Jewish benefactor by the name of Nicanor, known from ancient sources for having donated the gates of the Second Jewish Temple (516BC-70AD). According to lore, these brass gates were being sent by ship from Egypt to Judea when a storm broke out; thus, the crew was forced to cast one of them into the sea. When that proved to be ineffective, the crew decided to toss the second gate out as well. Hearing their plans, Nicanor declared that if they did so, they should cast him out as well. His self-sacrifice called for a miracle and the storm subsided. When the ship docked, the gate cast overboard was miraculously found floating in the harbor. All the Temple's gates were plated with gold save for Nicanor's, as the rabbis wanted the people to see the "miracle gates" in their pristine bronze form. Besides, their brass finish happened to have a special golden hue – or so the Talmud says...

Tip:
Visitors must show ID to enter the university campus.

The main Synagogue of the Hebrew University, Mount Scopus campus, this massive building with a minimalistic yet beautiful design is noted for the unique arrangement of the Torah ark and the panoramic view of the Old City from a huge window – with the Judaean Mountains and even the Herodion hill overlooking the horizon. As such, it's the only place in the world where one can actually pray at the Temple Mount. Services are offered daily at 7am, 1:10pm, 2:10pm, 4:10pm and in the late evening at 6:10pm and 9:30pm. All are welcome to visit anytime, except for the Jewish sabbath and on Jewish holidays.

Tip:
Be sure to check the balcony and roof, as the view is even more breathtaking from the outside.
Image Courtesy of Wikimedia and Daniel Ventura.
6

Founded in 1910 for Palestine's German Protestant community, this hospital named after Kaiser Wilhelm II's wife remains one of East Jerusalem's largest, as well as being the sole remaining specialized-care location in the West Bank / Gaza Strip. Although officially inaugurated in 1910, the construction – architecturally inspired by German palaces, such as the German Hohenzollern Castle – was only finalized in 1914; back then, it was the first building in the country to have electricity, provided by a diesel generator.

In the grounds is the Church of the Ascension, whose distinctive high square tower holding four large bells (the largest of them weighing six tons) is a landmark visible citywide and gives, in a converse manner, panoramic views over the whole city as far as the Dead Sea; should you wish to check this out, it is open to the public (Mon-Sat: 8:30am–1pm), though the lift has been out of service for a few years now so you will have to go up the stairs, which, at 60 meters high, is quite a climb. With lovely decorated domes and artwork, the church occasionally hosts choral and classical music concerts, a programme of which can be found on the website.
Image Courtesy of Wikimedia and אורי אלוני.