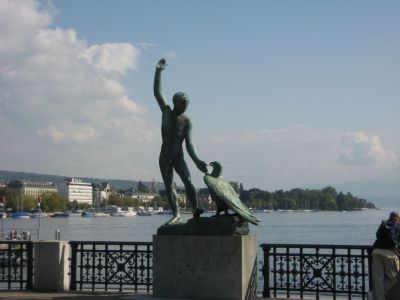 Bürkliplatz is one of the main town squares in Zurich–not only is it a fabulous destination, but it is also a central node in the city's transportation scheme. Many tram lines run through here, and the location connects the downtown with the lake-front promenades.

Directly north of Bürkliplatz lies a tree-lined square known as Stadthausanlage. The park centers around a music pavilion and is the site of a popular vegetable, cheese, flower, and bread markets. Bahnhofstrasse heads north from here, leading into the shopping district.

Bürkliplatz is a picturesque site to see the historic Alpenquai area on Lake Zurich. To the east is the nineteenth-century Quay Bridge, which crosses over the Limmat. The Seeuferanlage is a lake-front park, and there is also a nearby arboretum and aviary. Several lake cruises and water taxis depart from the area for scenic tours on Lake Zurich. There are also several fast-food kiosks in the area.

At the end of the plaza is a lake overlook, featuring a prominent statue of Ganymede. Just east, you will find a large monument called Geiserbrunnen. Built in 1911 by Jakob Brüllmann, the statue features a man taming a bull.
Image Courtesy of Wikimedia and Sgail.