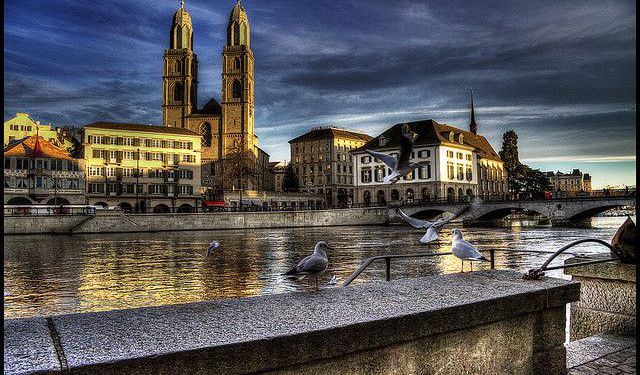 Zürich has many splendid churches and monasteries, which provide an immense spiritual and cultural contribution to the entire country. Many of them played a significant role in the Protestant Reformation. Each church is inimitable in its architecture. Follow this walking tour to become familiar with Zürich's most beautiful religious edifices.
Image Courtesy of Flickr and Problemkind.
How it works: Download the app "GPSmyCity: Walks in 1K+ Cities" from iTunes App Store or Google Play to your mobile phone or tablet. The app turns your mobile device into a personal tour guide and its built-in GPS navigation functions guide you from one tour stop to next. The app works offline, so no data plan is needed when traveling abroad.

St. Peterskirche (St. Peters Church) was built in the 9th century, which makes it the oldest church in Zurich. It also boasts the fame of having the largest clock face in all of Europe, measuring 8.6 meters (28.3 feet) in diameter. This translates to a minute hand that is 5.7 meters long (18.8 feet)!

The church was significantly altered in the 13th century and again in the early 1700s. Up until 1911, a firewatcher manned the steeple. It was his job to loo5.73k out the windows four times an hour to look for fires. If he spotted a fire, he was to sound an alarm and point to the direction of the fire with a flag. Apparently, this ended up being an effective strategy because unlike many other European cities, Zurich never suffered any devastating fires.

The interior of the church features a Baroque nave and a Romanesque choir with some faded medieval murals including a glimpse of a saint. An fascinating sight to see inside the St. Peters is the name of God in Hebrew above the pulpit, indicating the Reformation emphasis on the original biblical languages.

One interesting fact about the church is that it has split ownership. The City of Zurich owns the church tower, while St. Peter’s parish of the Swiss Reformed Church owns the belfry and bells, as well as the staircase leading to the tower.

2) Fraumünster (Church of Our Lady) (must see)

As you may have noticed, Zurich’s skyline is dotted with church spires; however, none are as remarkable as the slender blue spire of the Fraumünster. In 853 Emperor Ludwig founded a Benedictine convent on this site and his daughter became the first abbess of the convent. In 874 a basilica with a crypt was added. The crypt holds the relics of the martyred two Patron Saints of Zurich, Felix and Regula.

The present church on the site dates from the mid 13th century, but the crypt still remains beneath the church. Reformation closed the convent and in 1524, the last abbess donated the church and abbey to City of Zurich. All icons and religious imagery were destroyed.

The church underwent a remodel in the 1970, with the installation of beautiful stained glass windows by the famous Russian-French modernist artist Marc Chagall. The five windows are 10 meters high and each has its own color theme. On the northern side is the red-orange “Prophet” window. On the eastern side, the windows are named “Jacob”, “Christ”, and “Zion”, from left to right. The south wall piece is called “Law”.

Why You Should Visit:
Reasonable entry fee and definitely worth stepping in to admire the lovely Marc Chagall stained glass windows.
Included in the ticket is a very good audio guide that really brings the building and the 5 windows to life.

Tip:
Be sure to bring Swiss francs as only cash is accepted.
NO PHOTOS of the Marc Chagall windows allowed inside.

The Water Church is another church with a long history in the city. The first mention of the church goes back to 1250. It was constructed on a small island in the Limmat River. The first church on the site was built in the 1100s and was reconstructed at various times. It was completely reconstructed in 1486.

During the Reformation, the church was seen as a place of idolatry. The Reformation leader turned it into a secular use, specifically a library. In 1634 the church became the first public library in Zurich. In the 1800s, the island was connected to the riverbank. In 1917, the library that was housed in the church merged into the Central Library and the empty church became a place for storing crops.

In the 1940s, together with reconstruction work, some archaeological excavations took place. After the 1940s renovations were complete, the church building went back into religious use, specifically as the Evangelical-Reformed State Church of the Canton of Zurich.

Aside from its long history, the church is also known for standing on the site of where it is believed that two Patron Saints, Felix and Regula, were executed in the Middle Ages. Felix and Regula were siblings and members of a Roman military unit. Legend has it that Felix and Regula refused to particulate in the persecution of Christians. The Water Church site is where they were decapitated.

Why You Should Visit:
Hushed and intimate – a space for rest or meditation in the middle of an active day.
The Giacometti windows are a highlight, as is the crypt below.

Opening Hours:
Wed-Fri: 12-3pm; Sat-Sun: 12-5pm
During church services and other occasions, no visits are possible.
Image Courtesy of Wikimedia and Roland zh.
4

The Grossmunster Church is a Romanesque-style Protestant church in Zurich and has a very interest history. It is one of the four major churches in the city (the others being the Fraumunster, Predigerkirche and St. Peterskirche). According to legend, the church was originally commissioned by Roman emperor Charles the Great. Construction of the present structure commenced around 1100 and it was inaugurated around 1220.

The Grossmunster Church was the birthplace of the Swiss-German reformation. In 1520, Swiss reformation leader Huldrych Zwingli initiated the Swiss-German Reformation in Switzerland from his pastoral office at the Grossmunster. Zwingli won a series of debates presided over by the magistrate in 1523 which ultimately led local civil authorities to sanction the severance of the church from the papacy.

The reforms initiated by Zwingli and continued by his successor, Heinrich Bullinger, account for the plain interior of the church. The iconoclastic reformers removed the organ and religious statuary in 1524.

These changes, accompanied by abandonment of Lent, replacement of the Mass, disavowal of celibacy, eating meat on fast days, replacement of the lectionary with a seven-year New Testament cycle, a ban on church music, and other significant reforms make this church one of the most important sites in the history of the reformation.

A statue of the emperor Carolus Magnus, or Charles the Great, can be found at the southern tower of Grossmunster Church. Carolus Magnus was the Holy Roman Emperor between 771 and 814. He united majority of western Europe Central Europe. His achievements gave a new meaning to his name. In many European languages, the very word for "king" derives from his name. The statue shows Carolus holding his sword and it looks as though his crown is falling off his head.

Why You Should Visit:
Fairly plain inside, but the sliced agate windows are some of the more interesting and colorful anywhere.
The old statue of Carolus Magnus is definitely worth seeing, and you can't miss the beautiful door as you go in.

Tip:
A trip to the top of the tower is worth it if you can do 180+ steps straight up. The views are wonderful and you can stay as long as you wish.

The Preacher’s Church, located in Zurich’s Old Town, has a long history in the city. The first mention of the church in records dates back to 1213, when it served as a preacher’s church. It was run by monks of the Dominican order who focused on spreading the word of the church. In the 1500s, reformation in Switzerland, lead by Ulrich Zwingli, resulted in the Predigerkirche becoming Protestant. During the time of the Reformation, much of the elegant ornamentation was removed from the church.

The building features Gothic forms, with one side visible from the street and the other side integrated into the city’s central library. The library is located on the site of a former monastery that was also shuttered during the Reformation. The church experienced many renovations and restorations. The main form of the church that is visible today dates back to the early 1600s. A steeple was added in 1899, the work of architect Gustav Gull.

Today, the church is primarily Protestant; however, it does employ a Catholic priest and occasionally has celebratory masses with Muslims and Buddhists. It draws immigrants from a variety of faiths. The church is open seven days a week to parishioners and visitors alike.
Image Courtesy of Wikimedia and © Roland Fischer, Zürich / CC-BY-SA-3.0 Unported.