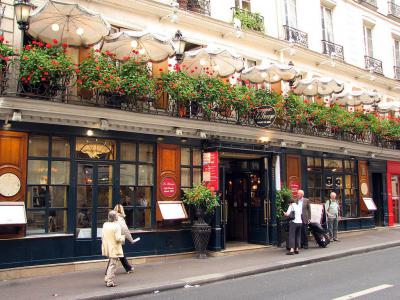 Open in 1686, Café Procope is widely referred to as "the oldest continuously operated restaurant in Paris". Apparently, it was an Italian, Francesco Procopio, who had the idea of opening an establishment near Saint-Germain-des-Prés where people could try coffee, which had only been introduced twenty years earlier in the Paris court. He decorated it luxuriously with mirrors, chandeliers, and gilded objects in order to attract high society. In the 18th and 19th centuries, Voltaire and Rousseau were a usual coterie, in what was the first literary café. It is said that Denis Diderot wrote his Encyclopedia within its walls; though plenty celebrities of other stripes frequented there too, among the most prominent guests being Napoleon, Benjamin Franklin, John Paul Jones, and Thomas Jefferson.

What continues to makes this café special, in addition to its association with the aforementioned names, is its epic décor that takes you back to the 17th century, as well as the excellent dishes they serve. The café also exhibits some interesting items like Napoleon’s hat (which he allegedly left there to pay a debt) and the last letter from Marie Antoinette to Louis XVI. It is believed that this was the place where Marie Antoinette’s death warrant was signed.