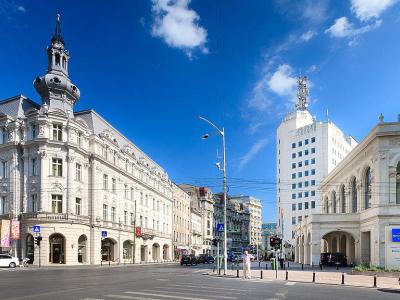 Calea Victoriei (Victory Avenue) is a major avenue in central Bucharest. Situated in Sector 1, and having a length of 2.7 kilometres (1.7 mi), it leads from Splaiul Independenței (which runs parallel to the Dâmbovița River) to the north and then northwest up to Piața Victoriei, where Șoseaua Kiseleff continues north.

Initially, the road was known as Ulița Mare (Large Street), also known as Drumul Brașovului (Brașov Road), being part of the trade route between Bucharest and the city of Brașov, in Transylvania. In 1692, ruler Constantin Brâncoveanu paved the road with wood and partly regularized it, making it pass through the domains of the Bălăceni, of the Saint John Monastery, Zlătari Monastery and of the Cantacuzenes up to the Sărindari Monastery. Since 1692 it was known as Podul Mogoșoaiei (Mogoșoaia Wood-Paved Road) because it also was connecting the Bucharest's center with Brâncoveanu's Mogoșoaia Palace some kilometres outside the city.

Most roads in the Balkans at that time became muddy in the spring and autumn, and the wood prevented this. Consequently, the road was one of the most important construction works of the area and a source of pride to Bucharesters. The area surrounding the road became the most fashionable part of Bucharest: 35 boyar houses were located on the road itself in 1775.

Podul Mogoșoaiei was the first street in Bucharest to be illuminated with candles during the night, starting July 1814.

The wood was not a very sturdy material and often it was in a bad state, despite being repaired several times (including in 1793 and 1814). During the Russian occupation of the Danubian Principalities, in the aftermath of the Russo-Turkish War (1828–1829), an extension from Piața Victoriei northward was built by Pavel Kiseleff, the commander of the occupation troops, and is today named after him. In 1842 the road was paved with cobblestone. It was later upgraded to asphalt.

Today, the avenue is lined with new fashion shops, art boutiques, coffee shops and restaurants, making it an upmarket shopping strip in Bucharest.
Image Courtesy of Wikimedia and Mihai Petre.
Sight description based on Wikipedia.