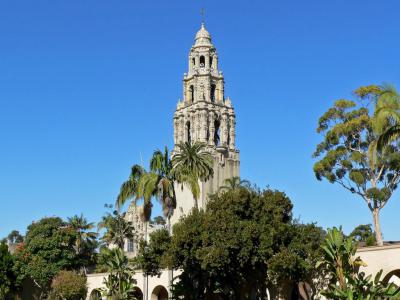 The California Building with its ornate facade and blue-and-gold dome, together with the adjoining California Tower, are among the most recognizable landmarks in San Diego. They house the San Diego Museum of Man. The design and ornamentation combine many style elements including Gothic, Plateresque, Baroque, Churrigueresque, and Rococo to create the impression of a Spanish Colonial church.

The California Tower is 198 feet (60 m) tall and is open for public tours. It offers impressive 360-degree views of the park and San Diego, all the way to Mexico down on the south and the mountains to its east. The tower's design is Spanish while the details and color are Mexican in style. There is a Maas-Rowe carillon in the tower that can be heard throughout the park. It plays the Westminster Chimes every quarter-hour, and a resident carilloneur plays three songs at noon every day. The tower has been described as "San Diego's Icon" and is the most photographed and best-known landmark in San Diego.
Image by Stan Shebs on Wikimedia under Creative Commons License.
Sight description based on wikipedia