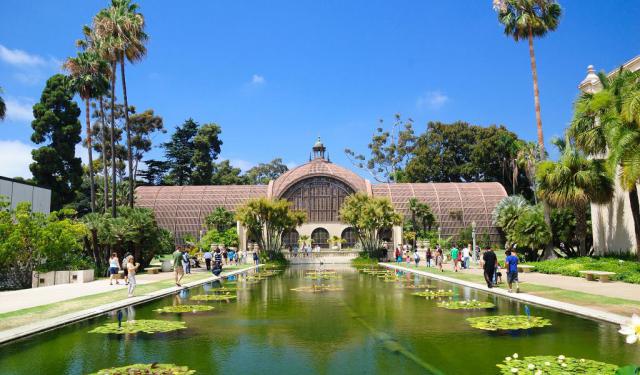 Image by Ming-yen Hsu on Flickr under Creative Commons License.

Named after the Spanish explorer Vasco Núñez de Balboa, Balboa Park is one of the largest cultural parks in USA. The park features 15 famous museums, wonderful gardens, renowned cultural venues and the San Diego Zoo. It is a must see attraction in San Diego and plays host to a constant stream of plays, musicals, museum exhibitions and live concerts. Take this self guided walking tour to discover the amazing Balboa Park in San Diego.
How it works: Download the app "GPSmyCity: Walks in 1K+ Cities" from iTunes App Store or Google Play to your mobile phone or tablet. The app turns your mobile device into a personal tour guide and its built-in GPS navigation functions guide you from one tour stop to next. The app works offline, so no data plan is needed when traveling abroad.

The California Building with its ornate facade and blue-and-gold dome, together with the adjoining California Tower, are among the most recognizable landmarks in San Diego. They house the San Diego Museum of Man. The design and ornamentation combine many style elements including Gothic, Plateresque, Baroque, Churrigueresque, and Rococo to create the impression of a Spanish Colonial church.

The California Tower is 198 feet (60 m) tall and is open for public tours. It offers impressive 360-degree views of the park and San Diego, all the way to Mexico down on the south and the mountains to its east. The tower's design is Spanish while the details and color are Mexican in style. There is a Maas-Rowe carillon in the tower that can be heard throughout the park. It plays the Westminster Chimes every quarter-hour, and a resident carilloneur plays three songs at noon every day. The tower has been described as "San Diego's Icon" and is the most photographed and best-known landmark in San Diego.

Image by Stan Shebs on Wikimedia under Creative Commons License.
Sight description based on wikipedia
2

This famous garden derives its name from a famous castle that is located in Seville, Spain. It sits near the Art Institute and the Mingei Museum in Balboa Park.

The garden is well known for more than their beautiful flowers and plants. There are some stunning ornate fountains located here that are covered in Moorish tiles of yellow, green, and blue. In terms of design, it is a formal garden that is surrounded in classic boxwood hedges. The designs are typical of classic gardening design. The topiaries are beautiful here. It is planted with over 7,000 annuals that bring a cacophony of color to the location all year around. It has been set to replicate the design of the gardens that was put in place in 1935 by architect Richard Requa whospent two years designing the overall scheme.

The Alcazar Garden is open all year around. Admission is free.

Why You Should Visit:
Small but gorgeous place. The Spanish tile and water features amongst all the flowers make an excellent backdrop for pictures.

Tip:
Benches in shady area dot the garden, so you can take a breather from exploring Balboa Park and its many attractions.


Image by Roman Eugeniusz on Wikimedia under Creative Commons License.
3

The House of Pacific Relations International Cottages is a complex of cottages in San Diego's Balboa Park. There are 33 cottages and they are like little museums, each showcase one country, its culture and traditions. Most the cottages are for countries in Europe, save for six - they are Iran, Israel, Puerto Rico, US, China, and the Philippines. Countries that do not have their own cottage have their displays in the nearby Hall of Nations.

The cottages are run by volunteers. On weekend you mau find many cottages open with some serving free food and drinks from that country.
Image by BrokenSphere on Wikimedia under Creative Commons License.
4

Free organ concerts are given at 2:00 p.m. each Sunday afternoon, sponsored by San Diego Parks and Recreation Department, the Spreckels Organ Society and private donations. On Monday evenings in the summer, The Spreckels Summer International Organ Festival is also presented by the Spreckels Organ Society. During the summer on Tuesdays, Wednesdays, and Thursdays, "Twilight in the Park" provides mixed popular concerts. The annual December Nights celebration is performed on the Spreckels stage. The San Diego Community Christmas Center displays nativity scenes in the Pavilion during the Christmas season.

All in all, the concerts are impressive organ in the open air and it is always nice to watch a performance in the surrounding beauty.
Image by Nelro on Wikimedia under Creative Commons License.
Sight description based on wikipedia
5

The Japanese Friendship Garden is one of the true gems of Balboa Park. It started as a tea house during the Panama-California Exposition of 1915, and has continued to please visitors ever since. It now covers over two acres of ground.

As you wander down its paths, you will be able to visit a Zen Garden, the exhibit house, and a real koi pond. The designs that are created in the sand are pieces of art all in themselves. The strategic placement of the rocks and plants tell a story of about how the garden creates harmony among the individual pieces. One of the best features in the garden is the bonsai exhibit. There are hundreds of examples of this classic Japanese art.

There are weekend classes covering subjects like sushi making, bonsai gardening, calligraphy, and conversational Japanese. It is open to the public Tuesday through Sunday from 10:00 a.m. until 4:00 p.m. The garden is closed on Mondays and most major holidays.
Image by cultivar413 on Flickr under Creative Commons License.
6

The Old Globe is a professional theatre company located in Balboa Park. It produces about 15 plays and musicals annually in summer and winter seasons. The Old Globe Theatre was built in 1935 as a copy of the Globe Theatre in London, England, where many of William Shakespeare's plays were performed during his lifetime. Like the original Globe, the theatre was open in the center with a roof over the seating on the sides.

Over the ensuing decades the Old Globe has grown into an internationally known theatre complex. Today it is a great theater for seeing a play. In 1984 it received the Tony Award for best regional theatre.
Image by Bernard Gagnon on Wikimedia under Creative Commons License.
7

The Botanical Building is an historic building located in Balboa Park. Built for the 1915–16 Panama–California Exposition, it remains one of the largest lath structures in the world. The Botanical Building houses a variety of ferns, orchids, bromeliads, camelias, palms and tropical trees. They are all marked and provide a gorgeous display as many of the larger ferns and palms reach to top of the building.

In the front of the building, a large reflecting pool sparkles with elegant waterlilies and colorful koi. The setting of the Lily Pond and Lagoon with the Botanical Building in the background is one of the most photographed scenes in San Diego - it is a symbol and icon of Balboa Park. Any visit to Balboa Park is incomplete without a visit to the Lily Pond and Lagoon.
Image by GPA Photo Archive on Flickr under Creative Commons License.
8

For art lovers, a stop at Spanish Village Art Center in Balboa Park is a must. Built for the second California Pacific International Exposition in 1935, these quaint buildings and colorful courtyard tells the story of life in a charming old Spanish village. After the exposition, the village re-opened as an art center by a group of dedicated artists.

Over the following six decades, local artists have continued to enhance this historical landmark by dding to its beauty with colorful concrete tiles, flowers and unique studio entryways. Today the art center is a vibrant and thriving community encompassing over 200 artists who are eager to share their love for art with visitors to the village.

Throughout the year there are numerous special events, workshops, camps and courses that showcase the latest works by local artist and encourage people of all ages to learn the beauty of art. Come here to watch, learn and shop. Admission is free, experience is priceless.

The San Diego Zoo in Balboa Park is one of the largest and most progressive zoos in the world, with over 4,000 animals of more than 800 species. It is also one of the few zoos in the world that houses the giant panda. The zoo offers a guided tour bus that traverses 75% of the park. There is an overhead gondola lift called the Skyfari, providing an aerial view of the zoo. Exhibits are often designed around a particular habitat. The same exhibit features many different animals that can be found side-by-side in the wild, along with native plant life. Exhibits range from an African rain forest to the Arctic taiga and tundra in the summertime. Some of the largest free-flight aviaries in existence are here. Many exhibits are "natural" with invisible wires and darkened blinds (to view birds), and pools and open-air moats (for large mammals).

Why You Should Visit:
One of the best zoos (if not the best!) in the US and the world.

Tip:
Book online and wear VERY comfortable walking shoes!
No coolers or straws allowed in the park, but you can bring in food and beverages.