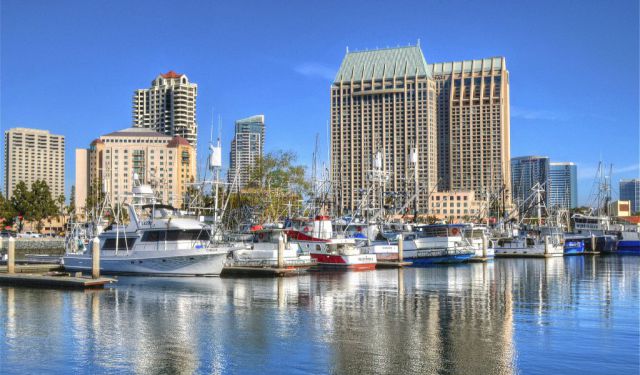 Adjacent to downtown San Diego and the Big Bay, Embarcadero Marina is a testament to the region's colorful maritime heritage, offering several outstanding ship museums, vibrant waterfront shopping and dining, and pristine views of the city skyline. Its numerous amenities make it the perfect place for a self-guided walk on your San Diego itinerary.
Image Courtesy of Flickr and William Garrett.
How it works: Download the app "GPSmyCity: Walks in 1K+ Cities" from iTunes App Store or Google Play to your mobile phone or tablet. The app turns your mobile device into a personal tour guide and its built-in GPS navigation functions guide you from one tour stop to next. The app works offline, so no data plan is needed when traveling abroad.

Nicknamed the "Jewel on the Bay" due to its notable Art Deco/Beaux-Arts architecture (with hints of Mission/Spanish Revival) as well as its location fronting San Diego's Bay, this multi-story, tower-topped structure used innovative construction techniques to guard against earthquakes. Considered to be "a prototype of American civic center architecture", the Depression-era building (circa 1938) was listed on the National Register of Historic Places in 1988.

Out in front, there is a beautiful fountain sculpture called "Guardian of Water", depicting a woman holding a jug of water, that symbolizes San Diego's role in being a responsible custodian of its resources. Installed in 1939, it was carved from a single, 22-ton, slab of granite. Quite spectacular.

In 2014, the 12-acre (4.9 ha) Waterfront Park opened on both sides of the building, making for an urban delight. More than a decade in the making, it contains open grassy areas, gardens planted with drought-tolerant flowers on the north side, and picnic areas, a playground with colorful swings and slides, plus interactive water fountains for little children to frolic in – on the south side.

One of the more unique places to visit in San Diego, the Maritime Museum was opened in 1948 when the need was identified to have a place to preserve some of the old ships of the world. Today it maintains one of the largest collections of old ships you can find anywhere in the U.S.

Among the main attractions is the famed Star of India – an 1863 model ironbark, a couple of pirate ships and two submarines. You will also want to visit the Berkeley, which is a 1898 steam ferry that used to ply for 60 years on San Francisco Bay (the steam is now gone, and the work is performed realistically by hydraulics and compressed air). There is so much to explore! Docents are available in many places to explain things, and this really lends to the experience.

Tip:
Don't miss the state-of-the-art Library and Research facility here, as well as the maritime archive. You can also take a boat ride from the museum while in the area.

The United States' longest-serving aircraft carrier of the 20th century (from 1945 to 1992), USS Midway was known for several naval aviation breakthroughs as well as several humanitarian missions. Approximately 200,000 sailors stood aboard the carrier – the only one to serve the entire length of the Cold War and beyond before it was turned into a museum ship. A superbly impressive military museum and a fantastic place for a family trip!

A high-definition, holographic movie theater – "The Battle of Midway Theater" – was added in 2017, and two years later the museum added a virtual reality flight simulator ride in addition to its existing four flight simulators.

Adjacent to San Diego Bay, this waterfront shopping and dining complex houses more than 70 shops, galleries, and eateries on 90,000 sq ft (8,000 m2) of property – but also several freestanding buildings in an assortment of architectural styles, from Victorian to traditional Mexican. Situated in walking distance from the San Diego Convention Center and the cruise ship terminal, it is designed to be a car-free environment, with winding paths rather than streets connecting the various buildings.

Among other things, Seaport Village offers a nice view of the bay and its location is an interesting one. It was built on landfill over Point of the Dead, where the Spanish expedition of 1782 buried those who had died of scurvy. In later years it was used as a railroad yard where goods and other materials used to come.

Today Seaport Village is a vibrant seaside destination for shopping, dining and entertainment. On sunny weekend days, you can see people walking, relaxing, visiting the outstanding ship museums nearby or losing themselves in the shops, cafes and restaurants.
Image Courtesy of Flickr and Prayitno.
5

Right on San Diego's Marina waterfront, this high-rise hotel complex is composed of two towers. The towers are the third- and ninth-tallest buildings in the city, with the taller one ranking as the tallest on the West Coast waterfront.

The bar on the top floor of the Manchester Grand Hyatt offers a sweeping view of San Diego's downtown and the bay. From the bar, one can see as far as Coronado Island and Mexico. If you're looking to have a bird-eye's view of the city, stop by and buy yourself a drink here.
Image Courtesy of Wikimedia and Bernard Gagnon.