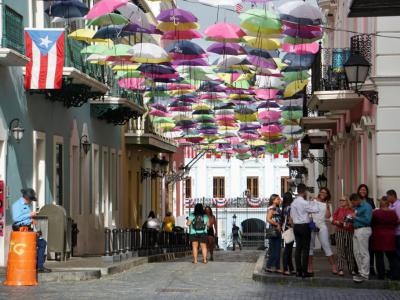 Proudly presiding over the bay of San Juan is the imposing La Fortaleza (Fortress) building, formally known as the Palace of Santa Catalina, the official residence of the Governor of Puerto Rico. The narrow road leading to it, called Fortaleza Street, is the main artery of San Juan's historic quarter, cutting through most of it, and is also the oldest street in the area. It starts from Columbus Square and for the whole duration is lined with government buildings, hotels, perfumeries, craft shops, jewelry stores and restaurants, gradually transforming into Avenue Juan Ponce de León in the east.

Just like many other colorful cobblestone streets in Old San Juan, each one more photogenic than the other, this thoroughfare is an important tourist attraction, in large part due to its historical and cultural significance. Visiting Fortaleza Street should be an integral part of every Old San Juan itinerary.

While the walled-in Old City has no shortage of vibrant photo spots, Fortaleza Street really stands out above the rest due to the display of umbrellas creating an overhead canopy that makes it particularly recognizable. These umbrellas tend to change colors during the year, from rainbow to all pink. Before the umbrellas, La Fortaleza Street had colorful kites.
Image by Mariordo (Mario Roberto Durán Ortiz) on Wikimedia under Creative Commons License.
Sight description based on wikipedia