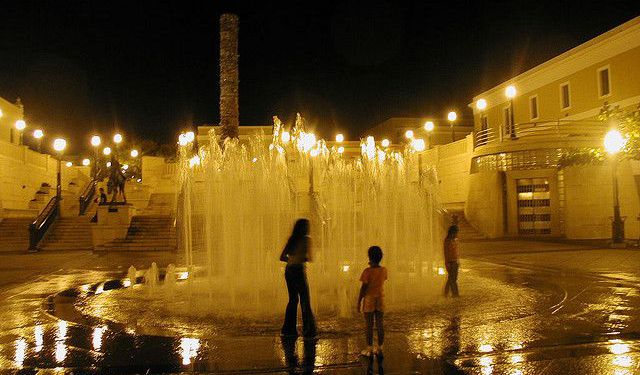 Image by El Tecnorrante on Flickr under Creative Commons License.

A distinctive feature of Old San Juan is the number of quaint historic squares. Many of them are adorned with beautiful fountains, prominent monuments and intricate sculptures recounting rich history of this amazing city. Check out San Juan’s most popular squares on this self-guided tour!
How it works: Download the app "GPSmyCity: Walks in 1K+ Cities" from iTunes App Store or Google Play to your mobile phone or tablet. The app turns your mobile device into a personal tour guide and its built-in GPS navigation functions guide you from one tour stop to next. The app works offline, so no data plan is needed when traveling abroad.

Columbus Square is one of the most important squares in San Juan. Originally known as Santiago Square, back in the 17th century this square literally marked the doorstep to the old town. Encircled by stone walls in 1635-1641, the only way into the city was then through five gates, the centermost of which was Puerta de Santiago or Puerta de Tierra (the Land Gate), straddling the sole highway linking the walled San Juan islet to the rest of Puerto Rico by land.

By 1772 the urban tapestry of San Juan had become more or less apparent, and the open space adjacent to the city's most important doorway had taken the shape of Santiago Square, albeit still unpaved at that time and long afterwards. From 1862, several projects had been undertaken to refurbish the square until in 1870 it finally started to take its current shape. In 1893 the statue of Christopher Columbus was installed to commemorate the 400th anniversary of the discovery of Puerto Rico, upon which the square was renamed Colón, or Columbus Square.

To the south of the square is a gem of Puerto Rican entertainment culture, the Teatro Tapia. Inaugurated in 1824, this lovely piece of neoclassical architecture was initially known as the San Juan Municipal Theater. Over the years, many notable performers have graced its stage, including the Russian ballerina Anna Pavlova. Outside the theater, along Fortaleza Street, there are a number of quaint restaurants and cute little cafes. Overlooking the square, in good weather, they are absolutely wonderful to sip some iced coffee outside whilst enjoying the sight of Columbus Square, the symbol of progress and testament of new and old San Juan!

Plaza de Hostos is a small landscaped square located near Casa Blanca, just in front of Plaza Dársena. Dedicated in 1998, the square commemorates the famous Puerto Rican educator, philosopher, intellectual, lawyer, sociologist and independence advocate Eugenio María de Hostos, aka “The Citizen of the Americas”, whose beautiful statue, featuring de Hostos in the company of joyful kids, created by José Buscaglia, stands in the center of the square, watching over the cruise ships entering and leaving the San Juan Bay.

Other than this, guests will find here lots of arts and crafts, as well as traditional piña coladas (a must try!) and other locally-made deserts sold from kiosks dotting the area. A nice place to stop after exploring the southern district of San Juan!

Image by Daderot on Wikimedia under Creative Commons License.
3

Plaza de Armas is one of the main squares in San Juan. Over the years, it has changed several names relative to the functions it served. Initially, in 1521, it was called Plaza de las Verduras (Vegetables Square). Then, during the 17th-19th centuries, it was known as Plaza de Armas, for being the ground for military exercises. Then, by the early 20th century, it was back to Plaza de las Verduras again, and used as a market.

Plaza de Armas is the city’s de-facto central square, modeled on the classic plazas of Madrid and Mexico. Although the square had factually existed for centuries, it was not until 1840 that the city council approved its proper construction, which commenced in 1851. It was then that the four statues made of bronze and oil-coated to simulate marble, representing the Commerce, Industry, Science and the Arts, arrived here. In fact, there were a total of eight statues to be installed, but the other four were lost. In 1872 the original statues were removed and the new marble ones, representing the Four Seasons, put in their place in the four corners of the square.

In 1955 two circular fountains and two lampposts in the center were added. The four statues were then configured in a circular fountain in front of the Palacio de la Real Intendencia on the western side, which houses the Department of State of Puerto Rico.

A highlight on the northern side is the Spanish colonial style Casa Alcaldía – home of San Juan City Hall – built in 1789, with twin turrets resembling those of a sister building in Madrid. A tinkling fountain, seating, shade trees, and a couple of old-school coffee booths make this a good spot for a sightseeing break.

Why You Should Visit:
An important social gathering spot, used for generations, and a popular tourist attraction.

Tip:
This laid-back space is loved by the locals to buy snacks, watch shows, play dominoes, and chat with friends. Take a seat on a bench to give your feet a break and soak up some of the everyday comings and goings. You can also buy your kids some traditional treats like sesame-seed lollipops or coconut candies.
Image by Roger W on Flickr under Creative Commons License.
4

Plaza La Rogativa is the most scenic square in San Juan, offering a 180-degree views of the San Juan Bay. From here, you can also get a clear view of the San Juan Gate and La Fortaleza, much as of the El Yunque national forest in a distance.

The name "Rogativa" means "Procession". According to a legend, during the 1797 attack by the British army, the governor of San Juan ordered a "rogativa" by a group of women, led by the bishop, to march through the city streets at night. Started from the San Juan Cathedral, the procession carried torches and crosses, while singing hymns along the way. The British mistook these sights and sounds for the arrival of Spanish Army reinforcement and gave up the attack. Commemorating that event are the four bronze statues in the center of the square.

Due to its historic significance and scenic beauty, Plaza La Rogativa is also popular a spot for wedding ceremonies. If nothing else, come here in late afternoon to watch the sunset over the San Juan Bay.
Image by Daderot under Creative Commons License.
5

Plaza de San Jose, named after the nearby old church, is a small square sitting on the corner of San Sebastian and Cristo Streets. The square center is marked by the statue of Juan Ponce de Leon, the Spanish explorer best known for being the first governor of Puerto Rico during 1508-1509 as well as for his expedition to Florida in 1513. Ponce de León's finger points to the west, in the direction of his final voyage in search of the Fountain of Youth. The metal for this statue is said to have come from the canons of an English ship destroyed during a failed attack by the British in 1797.

The square is surrounded by historic buildings, such as the San José Church and the Pablo Casals Museum. There are multiple cafes and restaurants all around where you can savor excellent Puerto Rican cuisine.
Image by Daderot on Wikimedia under Creative Commons License.
6

Quincentennial Square is quite modern and was built in 1992 to commemorate the 500th anniversary of Columbus's discovery of the Americas. The centerpiece of the square is a 40-feet tall monument, known as El Totem, designed by Puerto Rican artist Jaime Suárez. El Totem is made of clay brought from all over the Americas to signify the origins of the people inhibiting the continent. Down the stairway from El Totem, at the lower end of the square, is a walk-in water fountain.

The square offers an excellent view of the Old San Juan Cemetery where a great number of notable figures in Puerto Rican history have found their final resting place.
Image by Carlo Giovannetti (Thief12) on Wikimedia under Creative Commons License.