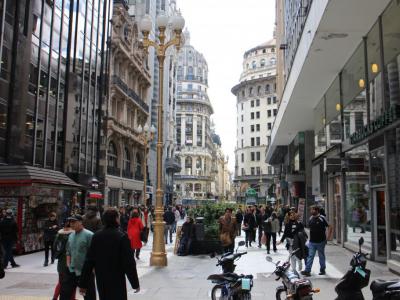 First appearing on a map in 1582, Calle Florida is one of the most famous streets in Buenos Aries. The street was cobbled in 1785 and became a pedestrian-only street in 1971. Today, you'll find a variety of branded stores, flower stalls, souvenir stores, cafes, and restaurants.

On weekdays, workers from the adjacent financial district pack the streets for lunch. In the evening, buskers entertain, and tango dancers dance in the streets.

There are several noteworthy buildings on Calle Florida. Galería Güemes has a gorgeous stained-glass dome and impressive marble columns. The neo-Gothic Palacio Elortondo-Alvear has stained glass and plaster molding. This historic building is now home to Burger King.

At the north end of Calle Florida, you'll find Plaza San Martín. The plaza features a monument to José de San Martín, hero of the Wars for Independence. The Monumento a los caídos en Malvinas (Monument for the fallen in the Falklands War) is also located in Plaza San Martín.