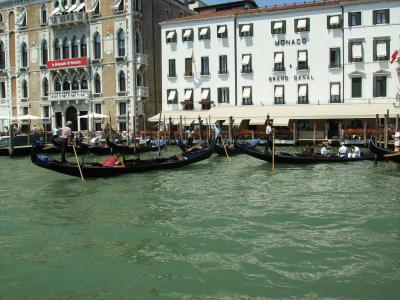 Calle Vallaresso is a street next to the Piazza San Marco where, for centuries, a large number of gambling houses had sprung up. Casanova frequented the street since, for a profligate and a spendthrift such as himself, gambling was an easy way to refresh his fortunes and came along with many opportunities to socialize, flirt, and make new connections.

Casanova's favorite spot for a game of cards – as well the ideal backdrop for his conquests – is now the lavishly decorated "grand ballroom" of the Hotel Monaco & Grand Canal, which used to be a major gambling house – "Il Ridotto" – until 1774, when it had closed permanently by order of the reformer Giorgio Pisani. Here, between walls covered with gilded leathers, nobles, or indeed anyone wearing a mask (baùta), could play.

When games were played strictly according to the rules, however, the house (or bank) had practically no advantage, so in time "Il Ridotto" and other gambling establishments devised subtle ways to dupe the punters. This was precisely what happened to Casanova, too, who had lost his fair share of fortunes over the years. At one point in time, he himself managed a small casino (in partnership with a wealthy backer).
Image by Abxbay on Wikimedia under Creative Commons License.