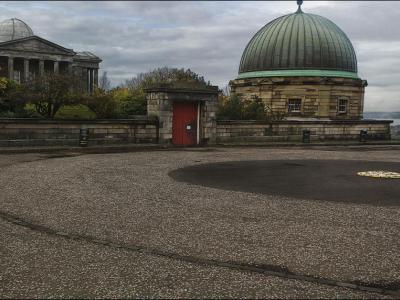 Sadly, closed to the public since 2009 for safety reasons, following vandalism and theft of the roofing materials, the Calton Hill Observatory is still worth the climb up the hill all the same, if only to see this remarkable building.

The idea of putting an observatory on top of the hill arose at the end of the 16th century when Thomas Short inherited a 12ft reflecting telescope designed by his brother. The building was architected by James Craig and funded by the University of Edinburgh on the condition that the observatory would be used by its students. However, after the Gothic tower on the southwest corner of the site was completed, the money ran out and the land reverted to the city in 1807.

In 1812, the city council donated the land to the Edinburgh Astronomical Institute, and in 1818, the central building, which resembles a Greek temple, was erected, designed by William Henry Playfair. A 6-inch refractor telescope was installed in the central dome and a 6.4-inch transit telescope took its place in the eastern wing.

The building became the Royal Observatory in 1822, but due to the lack of funding, it was given back to the government in 1847. In 1888, the site of the Royal Observatory was moved to Blackford Hill and, for many years afterwards, the Calton Hill Observatory had been used by the Astronomical Society of Edinburgh before it was abandoned and left vacant.

During its lifetime, the site’s main purpose was to measure time. Astronomers used the transit of certain stars through the Meridian to keep the Observatory’s clock accurate for navigation purposes. For many decades, all the ships docking in the port of Edinburgh brought their chronometers here to be adjusted.

Why You Should Visit:
Offers excellent views of not only the bridge and the Kingdom of Fife, but also of Arthur's Seat.
There are oodles of grass for people to picnic, watch sunsets and to absorb the city from up high.
Right on top is the Collective Gallery, if you're interested in contemporary art.

Tip:
While a visit is free of charge and open to all, best bring some cash with you in case you want to pay a small fee to climb the lighthouse.
Image by dun_deagh on Wikimedia under Creative Commons License.