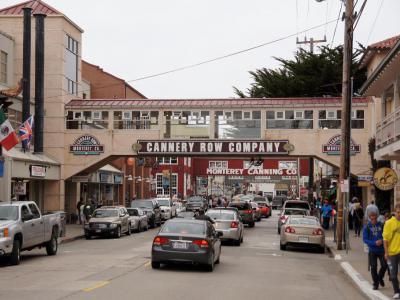 Cannery Row is a beautiful street near the Fisherman's Wharf. Cannery Row took his name after old sardine canning factories, which are no longer working. Instead there you can see a lot of shops, restaurants and bars.

Cannery Row is an historic industrial district west of downtown Monterey. Several companies operated large sardine canneries and packing houses from the 1920s until the 1950s when the sardines were overfished and the industry collapsed. The neighborhood was largely empty from the 1950s until the late 1980s when the Monterey Bay Aquarium bought the former Hovden Cannery and built their cannery around it. The Aquarium revitalized the neighborhood and it is now the number one tourist destination on the Monterey Peninsula. Several of the canneries burnt down in the 1970s and some of their empty foundations are still visible along the oceanfront. A free shuttle transports visitors between downtown Monterey and the Aquarium.

Once called Ocean View Boulevard, Cannery Row street was renamed in 1958 in honor of writer John Steinbeck, who had written a well-known novel of the same name. It has now become a tourist attraction with numerous establishments located in former cannery buildings, including Cannery Row Antique Mall which is located in the most historically intact cannery building open to the public. Other historical buildings in this district include Wing Chong Market, The American Tin Cannery which is a shopping mall, Doc Rickett's lab, next door to the aquarium and only open to the public a few times a year, and some of the water tanks written about by Steinbeck.

Cannery Row is now considered the historic cannery district from Foam St. to the ocean.
Image Courtesy of Flickr and Allie_Caulfield.
Sight description based on Wikipedia.