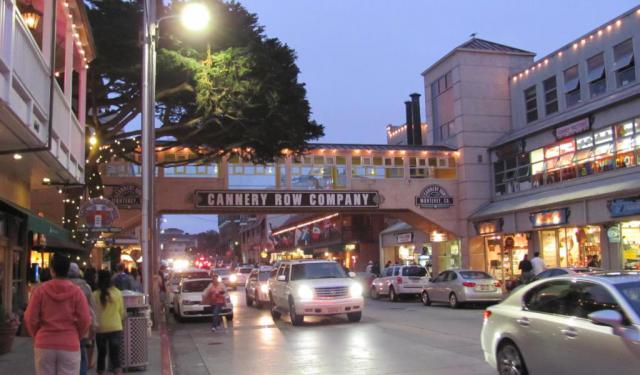 Cannery Row – the waterfront street in Monterey, California – was once home to a number of sardine canning factories, the last of which closed down in 1973. The former nickname for Ocean View Avenue became the street's official name in January 1958 to honor John Steinbeck and his famous eponymous novel. In the novel's opening sentence, Steinbeck described Cannery Row as "a poem, a stink, a grating noise, a quality of light, a tone, a habit, a nostalgia, a dream."

Indeed, there are few destinations out there just as rich as Monterey’s fabled street in terms of historic, cultural and natural attractions. Here are some of the area's top locations worth visiting for a truly memorable experience:

Lower Presidio Historic Park – a huge, natural sanctuary, home to the Presidio of Monterey Museum complex recounting the official history of the city.

Cannery Row Street itself – once known as Ocean View Boulevard, a major tourist sight with numerous establishments located in the former cannery buildings, including Cannery Row Antique Mall – a treasure trove for antique lovers, with more than 150 dealers!

The Cannery Row Monument – located in Steinbeck Plaza, features bronze sculptures of some of the city's most noteworthy historic figures, including John Steinbeck himself.

Monterey Bay Aquarium – one of the best places to see and interact with marine life, featuring species from all parts of the world.

To soak up the unique culture and beauty of Monterey Bay and to experience firsthand the appeal of Cannery Row that makes it a major tourist destination, check out this self-guided walk!
Image Courtesy of Wikimedia and MARELBU.
How it works: Download the app "GPSmyCity: Walks in 1K+ Cities" from iTunes App Store or Google Play to your mobile phone or tablet. The app turns your mobile device into a personal tour guide and its built-in GPS navigation functions guide you from one tour stop to next. The app works offline, so no data plan is needed when traveling abroad.

This huge park looks like a natural sanctuary. It contains the presidio complex - government buildings and their annexes. The park has a few distinct areas - the green grass area, the presidio area, and the museum area. The museum within the park is a piece of history and it holds documents, books and other interesting exhibits. Many city holidays and reunions are spent here. Army festivals and contests are a real delight.
Image Courtesy of Wikimedia and Kristen (Krimp) Fuentes.
2

The Presidio of Monterey Museum is located in a huge park, that looks more like a reservation. The park contains the Presidio complex, and the jewel of the complex is the Museum. The official history of Monterey stays here, silent and beautiful. The museum contains documents, pictures, books and things that belonged to the famous people of the County. Many important events take place in front of the Museum.

Image Courtesy of Wikimedia and JERRYE AND ROY KLOTZ MD.
3

Cannery Row is a beautiful street near the Fisherman's Wharf. Cannery Row took his name after old sardine canning factories, which are no longer working. Instead there you can see a lot of shops, restaurants and bars.

Cannery Row is an historic industrial district west of downtown Monterey. Several companies operated large sardine canneries and packing houses from the 1920s until the 1950s when the sardines were overfished and the industry collapsed. The neighborhood was largely empty from the 1950s until the late 1980s when the Monterey Bay Aquarium bought the former Hovden Cannery and built their cannery around it. The Aquarium revitalized the neighborhood and it is now the number one tourist destination on the Monterey Peninsula. Several of the canneries burnt down in the 1970s and some of their empty foundations are still visible along the oceanfront. A free shuttle transports visitors between downtown Monterey and the Aquarium.

Once called Ocean View Boulevard, Cannery Row street was renamed in 1958 in honor of writer John Steinbeck, who had written a well-known novel of the same name. It has now become a tourist attraction with numerous establishments located in former cannery buildings, including Cannery Row Antique Mall which is located in the most historically intact cannery building open to the public. Other historical buildings in this district include Wing Chong Market, The American Tin Cannery which is a shopping mall, Doc Rickett's lab, next door to the aquarium and only open to the public a few times a year, and some of the water tanks written about by Steinbeck.

Cannery Row is now considered the historic cannery district from Foam St. to the ocean.


Image Courtesy of Flickr and Allie_Caulfield.
Sight description based on Wikipedia.
4

This gallery was founded in 1994. Thomas Kinkade's works contain oils, lots of sketches, landscapes and studio work. One of the most amazing things about the museum is that the whole exhibit is organized like a large mansion. Entering it you will be surprised not only by the great art pieces hanged on the walls, but also by the personal, intimate approach offered to spectators of the artist's house, life, and vision.
Image Courtesy of Flickr and teofilo.
5

This Mall is a huge treasure for antique lovers: 21,000 square feet on 2 floors of everything you want! The products sold here are brought from more than 150 dealers. You'll be able to find anything you want, from jewelry to books, from vintage clothing to china, glassware, linen, home furnishings, toys, sports memorabilia and holiday decorations! The staff is very friendly and will help you find all the items you need.

This is the largest selection of socks and hosiery on the West Coast. Here all the socks are colorful, functional and most of all - FUN! The visitors adore the selection of fun socks, with faces of famous people, art masterpieces etc. They also have therapeutic and sports, leisure and casual socks. People flock here in order to buy unique souvenirs and gifts for their loved ones. You'll find tights for women and accessories, too.

The Cannery Row Monument in Steinbeck Plaza features bronze sculptures of some of the city's most noteworthy historical figures. These sculptures have an impressive background that includes views of Monterey Bay. When you see these statues, you will understand why so many visitors consider this sight a must-see.

These statues are of bronze, with the image of John Steinbeck standing out. One of the features also featured on the monument is Ed Ricketts, a marine biologist. In addition to being a known biologist in the area, Ricketts was also a close personal friend of Steinbeck's, making him an excellent addition to the monument.

Four of the other figures pictured on this monument include Ted Balestreri, Bert Cutino, Hary Davidian, and George Zarounian. These were local business owners who played a significant role in reviving Cannery Row, which has helped increase tourism to this part of the city. Steven Whyte was the sculpture responsible for creating this landmark.
Image Courtesy of Flickr and Ed Bierman.
8

Pacific Biological Laboratories, abbreviated PBL, was a biological supply house that sold preserved animals and prepared specimen microscope slides, many of which were of maritime aquatic species, to schools, museums, and research institutions. It was located in a building on what is now Monterey's Cannery Row on Monterey Bay in Monterey County, California.

The building, activities, and business were fictionalized as "Western Biological Laboratory" by John Steinbeck in his novel Cannery Row, as was a character based on one of its founders, Ed Ricketts. After a 1936 fire Steinbeck invested in the laboratory and owned half its stock.

In 1949, a year after Ricketts's death, the Pacific Biological Laboratories building was sold to Yock Yee, a local grocer. High school literature teacher and jazz enthusiast Harlan Watkins began renting the Pacific Biological Laboratories building from Yock Yee and purchased it in 1956. In 1958, after Watkins had married and moved to Europe, friends of Watkins, including Frank Wright, Ed Haber, Joe Turner, Fred Fry and Ed Larsh, joined together to purchase the building under the name “Pacific Biological Laboratories.” The building served as a weekly meeting place for club members, many of whom were prominent Monterey artists and writers. Founding club members also included nationally known cartoonists Hank Ketcham (creator of Dennis the Menace, Eldon Dedini and Gus Arriola. Several club members helped to start the Monterey Jazz Festival. The first festival was held in 1958.

The Pacific Biological Laboratories club sold their building to the City of Monterey in December 1993 for $170,000. A seismic rehabilitation of the building was done in 1998. It was restored by the Cannery Row Foundation which was given the Governor's Award for Historic Preservation.

On May 14, 1997, the 100th anniversary of Ricketts' birth, a commemorative plaque was placed on the 165 Fountain Avenue location by the Pacific Grove Heritage Society and the Pacific Grove Museum of Natural History Association. The Pacific Biological Laboratories is on the National Register of Historic Places.

Monthly tours are offered through the City of Monterey.
Image Courtesy of Flickr and Teemu008.
Sight description based on Wikipedia.
9

The Monterey Bay Aquarium is one of the best places to see and interact with marine life. The aquarium has species that represent marine life from all areas of the world, not just California. These species reside in habitats that are as close to their natural surroundings as possible, from dunes to kelp forests.

Watch the hilarious antics of the African penguins and their young. See some jellyfish and interact with stingrays. Watch sharks swimming in their tanks among other fish and see what the sea otters are up to. There is an animal species here to amuse everyone. You can even watch the animals being fed and interacting with the keepers.

You can also take part in educational programs that highlight marine life and ocean health. These opportunities allow you to learn more about how life in the ocean impacts all of us. Everything that you can see here will give you a greater appreciation for these species.
Image Courtesy of Wikimedia and Amadscientist.