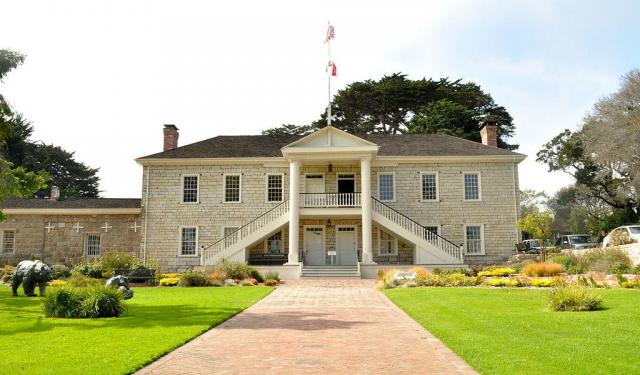 Image by Brigitta J on Wikimedia under Creative Commons License.

Monterey State Historic Park is a National Landmark and a part of the Monterey Old Town Historic District. Found on the grounds here are a group of significant old-time houses that once made up California's earliest capital and were the site of the state's first constitutional convention. Today these buildings retain their rich heritage, preserving an important part of Californian as well as Spanish, Mexican, and American history.

Among the buildings in question are California's First Theatre and Monterey's Old Customhouse – where the American flag was first raised over California, as a new part of the United States, in 1846.

Also noteworthy are: the Larkin House – California's first two-story brick house; Colton Hall – the City Hall of Monterey; Old Whaling Station, built in 1847; the Stevenson House – named so in honor of the Scottish novelist Robert Louis Stevenson who stayed here whilst recovering his health en route across the United States in 1879; Casa del Oro (the "House of Gold"); Casa Soberanes, which received its nickname — “The House of the Blue Gate” — from the blue gate at its garden entrance on Pacific Street; and many others.

If you're keen to explore the historical facets of America's West and to appreciate the cultural diversity that guided California's transition from a remote Spanish outpost to U.S. Statehood, take your time and embark on this self-guided walking tour. A great way to complete your discovery of Monterey!
How it works: Download the app "GPSmyCity: Walks in 1K+ Cities" from iTunes App Store or Google Play to your mobile phone or tablet. The app turns your mobile device into a personal tour guide and its built-in GPS navigation functions guide you from one tour stop to next. The app works offline, so no data plan is needed when traveling abroad.

The Old Customhouse is a Spanish Colonial style adobe structure built around 1827 by the Mexican government in the Pueblo de Monterey, Alta California, in present-day Monterey County. The former custom house (Aduana in Spanish) is the state's first designated California Historical Landmark, marking the site where U.S. Commodore John Drake Sloat raised the American flag and declared California part of the United States in 1846.

The Monterey Customhouse was a landmark that the Native Sons of the Golden West determined should not disappear if within their power to prevent it. The property belonged to the United States Government, but the Native Sons obtained a lease of the buildings and grounds and restored them in the early 1900s. The lease was ultimately transferred to a State Commission appointed under a legislative act passed in 1901, which act also carried an appropriation for further restoration of the building.

Image by Jsweida on Wikimedia under Creative Commons License.
Sight description based on wikipedia
2

This property in Monterey consists of a two-story adobe building that David Wright, a Scottish-born architect, constructed in 1847. Some of the functions this building has served include being a home for seafarers, a courthouse, and a law office. The state has owned this property since 1954.

One of the most unusual things about this building is that it has a well enclosed within the walls. As a result, over the years, the water has been free of contamination. Outside the building, a walled garden is the site of the city's annual Merienda celebration.

A costume exhibit that Monterey History and Art Association maintains is one of the most popular highlights here. In addition, you can check out Native American artifacts from the Holman Collection that offer insights into how these local, ancient cultures lived. Another benefit of this site is the California Museum of History housed on the property.
Image by McGhiever on Wikimedia under Creative Commons License.
3

The Casa del Oro—or "House of Gold" in Spanish—is in the Custom House Plaza. Built in 1849 as an army barracks, then as a hospital for sailors run by Thomas Larkin. Later the building was used as general store run by Joseph Boston in the 1850s. The origin of the name could be attributed to a period of time when the building was used as saloon and later as a gold dust exchange for miners. This building is a California Historical Landmark
Image by McGhiever on Wikimedia under Creative Commons License.
Sight description based on wikipedia
4

The Old Whaling Station and First Brick House are within the confines of Monterey State Historic Park. The location inside this landmark makes it easier to appreciate the beautiful surroundings. Both buildings are monuments to Monterey's past and perfect ways to learn more about the area's background.

The Old Whaling Station building goes back to 1847 when it was originally used as a private home. The Old Monterey Whaling Company acquired this building in 1855 for employee housing and its headquarters. Visitors will enjoy seeing the front walkway, which was constructed of whale vertebrae.

Another treasure next to the Old Whaling Station dating to 1847 is the First Brick House, which Gallant Dickenson constructed. It was the first structure built by bricks in California. However, the original owner left to prospect for gold, leaving the home's interior unfinished. Although part of the state historic park today, the building has been used as a restaurant in the past.
Image by McGhiever on Wikimedia under Creative Commons License.
5

A truly magnificent story! This theater was built by Jack Swan. He was an English sailor who settled in Monterey in 1843. Swan used lumber from a shipwreck to construct this theater in 1845. In 1847 former Army officers convinced Swan to build a small stage. The theater had benches, whale-oil lamps to light up the interiors, special candles for footlights and curtains, that were made of red and blue blankets. Most of the plays were melodramas and a ticket cost $5. In 1906 this theater was bought and donated to the State of California.
Image by d.neuman on Flickr under Creative Commons License.
6

Rafael Estrada constructed the Casa Soberanes, an adobe brick home on a hillside overlooking the bay, during the 1840s. His family lived there until it was sold to the Soberanes family in 1860, who lived there until 1922. The Serranos later purchased and restored the house in the 1920s and 1930s.

The house contains furnishings that are a blend of early New England and China trade pieces mixed in with modern Mexican folk art. Casa Soberanes received its nickname—The House of the Blue Gate—from the blue gate at its garden entrance on Pacific Street. Wine bottles, whale bones, and abalone shells border paths meandering through the sheltered garden. This building is a California Historical Landmark
Image by McGhiever on Wikimedia under Creative Commons License.
Sight description based on wikipedia
7

Operation hours: Daily: 10 am - 4 pm
Image by McGhiever on Wikimedia under Creative Commons License.
Sight description based on wikipedia
8

The Larkin House is a historic house built in 1835 by Thomas O. Larkin. It is claimed to be the first two-story house in all of California, with a design combining Spanish Colonial building methods with New England architectural features to create the popular Monterey Colonial style of architecture.

The House is a two-story wood frame structure, with walls of adobe and a low-pitch hip roof. Three of its four sides are covered by a two-story wood-frame flat-roof veranda. The post-and-beam framing is exposed in the interior, where there is also a fireplace and chimney.

In 1832 Thomas O. Larkin, a native of Massachusetts, joined his half-brother John B. R. Cooper in business in California. Larkin became the most influential American in Monterey, then the capital of Alta California. He served as the only United States consul to Mexico in Monterey. Larkin sought to build a house more typical of his native New England, but local sawmills were unable to supply him with sufficient redwood for the purpose. Larkin compromised by building a typical New England frame, but then finished its walls in whitewashed adobe. The framing made it possible to significantly enlarge the window openings over traditional Spanish Colonial architecture, and the style of this house rapidly spread across California.

In 1879, Scottish novelist Robert Louis Stevenson stayed at the French Hotel, now called the Stevenson House after him and dedicated to his memory. Stevenson lived there while recovering his health as he was crossing the United States to court his future wife Fanny Osbourne. While there, he often dined "on the cuff," as he said, at a nearby restaurant run by Frenchman Jules Simoneau which stood at what is now Simoneau Plaza.

Several years later, Stevenson sent Simoneau an inscribed copy of his novel Strange Case of Dr Jekyll and Mr Hyde (1886), writing that it would be a stranger case still if Robert Louis Stevenson ever forgot Jules Simoneau. Stevenson wrote some articles for the local Monterey newspaper, including one that beautifully evoked "the Old Pacific Capital."

The Stevenson House features a bas relief depicting the sickly author writing in bed. Today the building has been designated as a California Historical Landmark.
Image by McGhiever on Wikimedia under Creative Commons License.