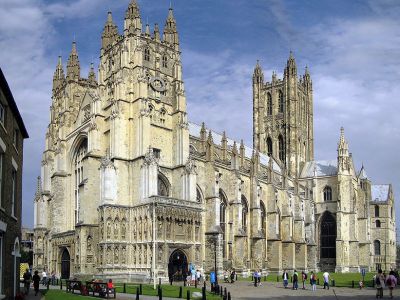 The formal name of the Canterbury Cathedral is the Cathedral and Metropolitical Church of Christ at Canterbury. It is one of the oldest and most well-known Christian structures in all of England and it is a World Heritage Site.

It was originally founded in 597 and has been expanded and rebuilt many times in its history.

In its earliest days, the church was part of a Benedictine monastic community and was the seat of the archbishop. The first bishop was Augustine of Canterbury, a missionary sent in 596 by Pope Gregory I. He also founded Saint Augustine's Abbey, though it was not called that then, located outside the city walls.

The building as it is now was more or less laid out by Archbishop Lanfranc and dedicated in 1077 after the Norman Conquest. It was built from stone from France and designed to be like the Abbey of Saint-Étienne in Caen.

A pivotal moment in the Cathedral's history was the murder of Archbishop Thomas Becket. Becket was murdered in the northwest transept in 1170 by knights of King Henry II. The events transformed the Cathedral into a place of pilgrimage. Such pilgrims were depicted in Chaucer's Canterbury Tales.

Today the Archbishop of Canterbury serves as the global leader for the Anglican Communion and leader of the Church of England.

The Cathedral is a World Heritage Site and one of the most stunning examples of Gothic architecture in England.

Plan to dedicate at least three hours to tour the Cathedral. GPSmyCity offers a self-guided tour to help you explore the Cathedral and its grounds.

Be sure to look up! Some of the most impressive examples of architecture lie in the fan vaulting, ornate carvings, and beautiful stained glassworks.
Image Courtesy of Wikimedia and Hans Musil.