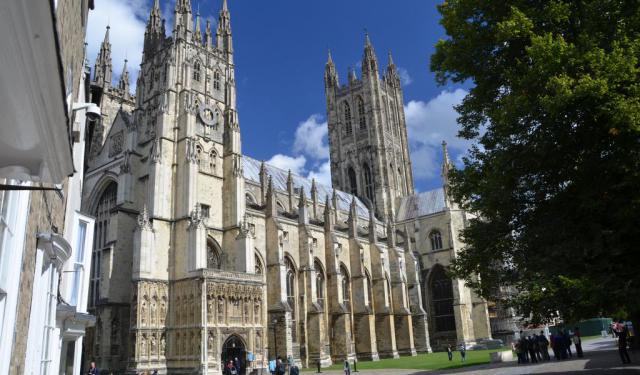 Canterbury Cathedral is one of the oldest regional Christian churches that played a major role in English Christianity. The Cathedral stands within its own walled area, surrounded by Medieval buildings and ruins. This self-guided walking tour takes you to see all the historically significant, magnificent structures within the precinct. It’s an amazing trip back to the Middle Ages.
Image Courtesy of Flickr and Marcus Meissner.
How it works: Download the app "GPSmyCity: Walks in 1K+ Cities" from iTunes App Store or Google Play to your mobile phone or tablet. The app turns your mobile device into a personal tour guide and its built-in GPS navigation functions guide you from one tour stop to next. The app works offline, so no data plan is needed when traveling abroad.

The primary route to Canterbury Cathedral passes through the ornate Gothic Christ Church Gate. Entrance to the rest of the Cathedral is through an adjoining guest information center and shop.

Like the rest of the Cathedral, the Gate has been repaired and restored numerous times.

The Gate suffered damage and the main statue was destroyed during the English Civil War in 1643. The statue was not replaced until 1990, even though the rest of the Gate was restored in 1660. In 1803 the original towers were removed but were replaced in 1937.

Over the past few years, there have been ongoing preservation and restoration efforts on the Gate and the rest of the Cathedral.

The Old Palace belongs to the precincts of the Canterbury Cathedral. It dates from the 11th century. The palace served as residence for many archbishops and it still remains. The building once housed The Parliament, since 1647, during the English Civil War. Then it got the previous status of the Bishop’s Palace and was rebuilt at the end of the 19th century. Archbishop's Palace underwent many alterations and adjustments in the course of time. It was reopened again in 2006 after a two-year process of much needed refurbishment.
Image Courtesy of Flickr and ahisgett.
3

The Cloisters are situated on the north side of the Canterbury Cathedral. It is a covered colonnade that encloses small square courtyards attached to the side of the Cathedral. The structure dates from the 14th century; it was planned and built in around 1400 by a Kentish Man, Stephen Lote. The highlight of the cloisters is the grandiose domed roof decorated with many painted shields and figures. The walkway served as a place for contemplation as well as for reading and writing. On the ceiling of the Cloisters are knobs that bear the arms of persons who have contributed money to the building and decoration of the Cathedral.
Image Courtesy of Wikimedia and Ad Meskens.
4

The Chapter House and the Cloisters are situated on the north side of the Canterbury Cathedral. This magnificent chamber inside a separate building is the largest chapter house in England. The Chapter House was built in the late 14th century. The central zone of the chapter house is an open space. The Chamber House interior features the wonderful Medieval stained glass, lofty timber roof, and stone seats ring the walls under arched stone niches and Prior’s noble seat. It was the meeting place for monks and priests who represented the council and prayed. Later, sermons were preached here. It's worth trying to get inside.
Image Courtesy of Wikimedia and ABrocke.
5

The formal name of the Canterbury Cathedral is the Cathedral and Metropolitical Church of Christ at Canterbury. It is one of the oldest and most well-known Christian structures in all of England and it is a World Heritage Site.

It was originally founded in 597 and has been expanded and rebuilt many times in its history.

In its earliest days, the church was part of a Benedictine monastic community and was the seat of the archbishop. The first bishop was Augustine of Canterbury, a missionary sent in 596 by Pope Gregory I. He also founded Saint Augustine's Abbey, though it was not called that then, located outside the city walls.

The building as it is now was more or less laid out by Archbishop Lanfranc and dedicated in 1077 after the Norman Conquest. It was built from stone from France and designed to be like the Abbey of Saint-Étienne in Caen.

A pivotal moment in the Cathedral's history was the murder of Archbishop Thomas Becket. Becket was murdered in the northwest transept in 1170 by knights of King Henry II. The events transformed the Cathedral into a place of pilgrimage. Such pilgrims were depicted in Chaucer's Canterbury Tales.

Today the Archbishop of Canterbury serves as the global leader for the Anglican Communion and leader of the Church of England.

The Cathedral is a World Heritage Site and one of the most stunning examples of Gothic architecture in England.

Plan to dedicate at least three hours to tour the Cathedral. GPSmyCity offers a self-guided tour to help you explore the Cathedral and its grounds.

Be sure to look up! Some of the most impressive examples of architecture lie in the fan vaulting, ornate carvings, and beautiful stained glassworks.
Image Courtesy of Wikimedia and Hans Musil.
6

Trinity Chapel is located at the east end of Canterbury Cathedral. It was completed in 1184 as a shrine for Saint Thomas Becket's relics. This site became a popular pilgrimage site.

The popularity of the pilgrimage site inspired Geoffrey Chaucer to write Canterbury Tales in 1387. In 1540, King Henry VIII had Becket's shrine and bones destroyed. Today, visitors will find a lighted candle marking the former site of Becket's shrine.

Edward Plantagenet, the Black Prince, is entombed in this chapel. King Henry IV and his consort, Joan of Navarre, are buried in Trinity Chapel. While most kings are buried in Westminster Abbey, King Henry IV wanted to be connected with Thomas Becket. There are alabaster effigies of the King and Queen on top of the tomb.

The Corona Tower is at the east end of Trinity Chapel. Also called Becket's Crown, this area housed some of Becket's relics. It also housed Saint Odo's and Saint Wilfred's shrines.
Image Courtesy of Flickr and Jules & Jenny.
7

The Water Tower is an octagonal tower adjacent to to the Cathedral building on the north side, behind the cloisters. This Romanesque tower is supported by a series of interwoven arches that look quite artistic. It was crafted by the order of Prior Wilbert to get a clean water supply to the priory buildings. The Water Tower dates back to the 12th century or earlier. Part of its piping survives and is functioning today. There is a large basin and a fountain in the center of the tower for washing.
Image Courtesy of Flickr and Andrew and Annemarie.
8

This is a new planted garden, also named Herbarium, on the site of the Medieval monk's dormitory adjacent to the original Monastic Herbarium. Healing Garden is part of the Cathedral Gardens and comprises a large Deanery garden, small orchard, rare Medlar tree and a herbaceous and vegetable garden. Enclosed on three sides, Healing Garden is planted with herbs that have been used for thousands of years and had been used by the first Monks for healing purposes. Most of these herbs are used by modern day herbalists.
Image Courtesy of Flickr and Dr Bob Hall.
9

The King's School is a British co-educational independent school for both day and boarding pupils in the historic English cathedral city of Canterbury in Kent. It is a member of the Headmasters' and Headmistresses' Conference and the Eton Group.

The school originated as a medieval cathedral school, and it is often claimed to have been founded in AD 597 by St. Augustine, therefore making it the world's oldest extant school. This is based on the fact that St. Augustine founded an abbey (within the current school's grounds) where it is known that teaching took place. When the dissolution of the monasteries occurred in the reign of Henry VIII, the school was refounded as The King's School, Canterbury.
Image Courtesy of Wikimedia and Oosoom.
Sight description based on Wikipedia.
10

At the north corner of the Green Court is the oldest structure in the Cathedral precinct. It is a covered staircase from 1100 built by the Normans along with the vast rebuilding of the buildings in the Cathedral close. The staircase is the part of the Poor Pilgrim's Hall that served as a shelter for pilgrims. The entrance and parts of the North Wall remained from that building. Today it’s part of the King's School. Near the Norman Staircase is The Memorial Court with an octagonal shaft on the base topped with the cross. It was erected after World War I. Now it serves as a memorial of those who died during the World Wars.
Image Courtesy of Wikimedia and Velvet.