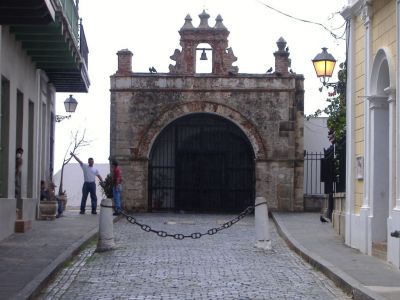 Capilla del Cristo (Chapel of Christ), is a small chapel located in the Old San Juan Historic District of Puerto Rico. Built in the 18th century, the structure has become a cultural icon of Puerto Rico and was saved from demolition in the 20th century. Most of the articles located at its altar are from 1753.

The chapel with its belfry is located in the Old San Juan Historic District in the western section of San Juan Islet, at the end of Cristo Street, now a pedestrian walkway. It sits on top of the old city walk. The chapel is a major tourist attraction in San Juan. Inside the chapel there is a famous painting called El Milagro ("The Miracle").

According to the legend, during a horse race that was taking place on the street where the chapel is located, a young rider and his horse took a bad fall and the rider went over the city wall but was miraculously saved. In a famous book about Puerto Rican legends, it says that the horse was killed but the rider lived. Afterwards, permission was granted to build the Catholic chapel and many festivals have been held, over the years, at the location to celebrate the miracle.

The chapel is open to publish on Saturday and Sunday from 12:00 to 18:00.
Image by Mtmelendez on Wikimedia under Creative Commons License.