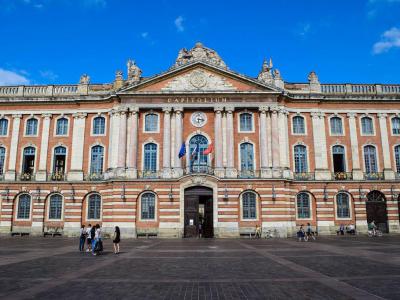 In 1096 Raymond IV, Count of Toulouse, took his army and headed for the Holy Land. The Pope said to do this. What could go wrong? Several religious expeditions and invasions later, the power of the Counts had waned.

By the 12th century the "Notables" who were watching the store, so to speak, while the Counts were away, created a group of capitouls (consuls) to manage the city. Thus the Capitole came to be. As the name suggests, the Capitole was for the Capitouls.

The facade of the Capitole is pink brick set in 1750 in Neoclassical style as designed by Guillaume Cammas. The Capitole is 456 feet long. It dominates the vast Place du Capitole in the heart of Toulouse. Eight columns above the main entrance are in memory of the eight original Capitouls. In 1873 a bell tower was erected atop the donjon.

A donjon is not a dungeon, but a keep, the strongest part of a castle. The donjon of the Capitole has a dark past. Jean Calas, an unlucky Protestant was interrogated here. The Duke de Montmorency was decapitated in the courtyard after losing an argument with Cardinal Richelieu. The donjon once housed city archives. Now it is the tourist office.

The Floral Games were poetry competitions held every May since 1324. First prize was a golden violet. Second prize was a silver rose. The contests were judged by the Leys d'amor, a theme on Occitan poetry.

Why you should visit
See first the power and perseverance of the city personified in the Capitole.
Image Courtesy of Wikimedia and Sanichacon111.