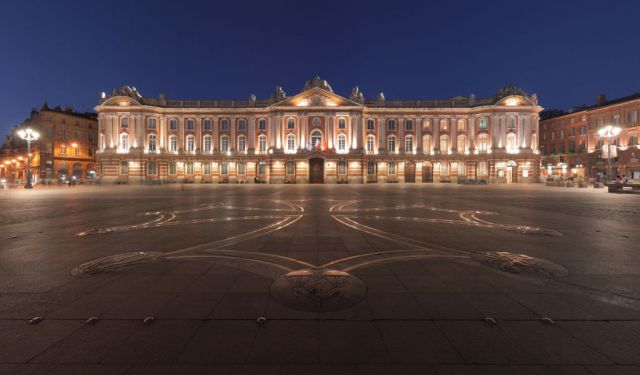 Even if you are not an architectural expert, you can appreciate the beauty of Toulouse's historic buildings. Walk the streets of Toulouse and admire medieval 16th-century buildings alongside 19th-century structures. Take this tour and explore the hospitals, hotels, churches and plazas that make Toulouse unique.
How it works: Download the app "GPSmyCity: Walks in 1K+ Cities" from iTunes App Store or Google Play to your mobile phone or tablet. The app turns your mobile device into a personal tour guide and its built-in GPS navigation functions guide you from one tour stop to next. The app works offline, so no data plan is needed when traveling abroad.

The Basilica of St. Sernin is the former church of the Abbey of St. Sernin or St. Saturnin, and it was built in the Romanesque style between 1080 and 1120. The bell tower, which stands directly over the transept crossing, is the most visible feature of the church. The structure is divided into five tiers; the lower three tiers date from the 12th century and the upper two from the 14th century. The spire was added in the 15th century. The 11th-century chevet is the oldest part of the building and consists of nine chapels. The church is known for its two exterior doorways, the Porte des Comtes and the Porte des Miégeville. Above the Porte des Comtes is a depiction of Lazarus and Dives. The interior of the basilica measures 115 x 64 x 21 meters, a vast space for a Romanesque church.
Image by Eric Kilfoil on Wikimedia under Creative Commons License.
Sight description based on wikipedia
2

The Capitole de Toulouse is the seat of Toulouse's municipal administration. In the 20th century, the structures surrounding the vast Place du Capitole were redesigned. Parts the Capitole building can be traced back to the 16th century, but the current Neoclassical facade dates back to 1750 and was built by Guillaume Cammas. The building's eight columns represent the original eight areas of the city. In 1873, Eugène Viollet-le-Duc built the bell tower. It was here that Jean Calas, a Protestant victim of a biased trial, was interrogated. Only the Henri IV courtyard and gate survive from the original medieval buildings. It was in this courtyard that Duke de Montmorency was decapitated after his rebellion against Cardinal Richelieu.
Image by B25es on Wikimedia under Creative Commons License.
Sight description based on wikipedia
3

Bernuy Hotel is located on Rue Gambetta in the historic center of Toulouse. Construction on the hotel continued from 1503 to 1533. The building was home to the first Jesuit college from 1567 to 1762 and later the Royal College. The hotel was designed by architect and sculptor Louis Privat. It was built in the Renaissance style. Its hexagonal tower is one of the highest in the city at 26.5 meters.
Image by Pinpin on Wikimedia under Creative Commons License.
4

The Hôtel d'Assézat is a 16th-century Renaissance palace, which houses the Bemberg Foundation, a major art gallery. The Hôtel d'Assézat was probably designed by Toulouse architect Nicolas Bachelier for Pierre d'Assézat, a rich manufacturer. Construction on the hotel began in 1555 and was not yet completed when Pierre d'Assézat died in 1581. It is an outstanding example of the Renaissance architecture characteristic of southern France. It has an elaborately decorated courtyard influenced by Italian Mannerism and by Classicism. The use of brick is typical of Toulouse architecture. The hotel now belongs to the city of Toulouse and was restored in the 1980s.
Image by ignis on Wikimedia under Creative Commons License.
Sight description based on wikipedia
5

Toulouse Cathedral (Cathédrale Saint-Étienne de Toulouse) is a Roman Catholic cathedral and a national monument of France. It is the seat of the Archbishop of Toulouse. The exact date of the original building's construction is unknown, although the first mention of a church building on this site is found in a charter dating back to 844. In 1073 the Bishop of Toulouse commenced work on a more elaborate structure, and more additions were made in the 13th century. The west front of the cathedral is irregular because it consists of two incomplete churches. The first church dates back to the early 13th century and includes the rose window from 1230. The other church was built around 1272 on a different axis. Although the architectural plan for the church was abandoned before it was completed, by 1445 a triforium had been added to the choir and a flamboyant west portal had been built.
Image by Pinpin on Wikimedia under Creative Commons License.
Sight description based on wikipedia
6

Hotel du Vieux-Raisin, also called Maynier Hotel, dates back to 1518 and is one of the finest mansions of the era. It was built for Maynier Berenger, a law professor and Lord of Canac and Galicia. The architectural style was strongly influenced by the Italian Renaissance. The hotel was completed in 1547 for the civil clerk Jean Brunet. The architectural plans were embellished by the famous Toulouse architect Nicolas Bachelier.
Image by Pinpin on Wikimedia under Creative Commons License.
7

Construction on Hôtel de Bagis took place in three stages over four centuries. The five buildings that John Bagis bought in 1533 were transformed by the famous architect Nicolas Bachelier into a beautiful hotel by 1537. These buildings were part of a complex with a Renaissance-style courtyard at its center. The stone facades of the buildings were decorated and carved by Bachelier himself. However, it was only in 1608 when Francis Clary became the owner that the building's facade became famous. He built an impressive stone exterior, which led to the hotel being nicknamed the "stone house." A later owner, Calvet-Besson, completed work on the buildings in 1857.
Image by Pom² on Wikimedia under Creative Commons License.
8

The Church of Our Lady of Dalbade is located in Toulouse's Carmelite neighborhood. Its current name comes from the ancient church that preceded it, which was covered with white plaster and thus called Santa Maria Dealbata (Saint Mary the White). The church has an organ constructed by Eugene Puget. This instrument was inaugurated on November 22, 1888, by Charles-Marie Widor and has recently been restored. The parish was entrusted in 2008 to the Archbishop of Toulouse, a priest of the Prelature of Opus Dei.
Image by Florent Pécassou on Wikimedia under Creative Commons License.
9

Pont Neuf, or New Bridge in English, is a 16th-century bridge. Original planning for the bridge began in 1542, and construction on the foundations started in 1544. The first arch was started in 1614. The bridge was finished in 1632 and was inaugurated on October 19, 1659. The bridge is not symmetrical, as the arches are of different lengths. The openings through the piers were originally supposed to represent the face and mane of a lion. A triumphal archway added in 1686 constricted traffic and was removed in 1860. The bridge is 220 meters long and has seven arches.
Image by Camille Harang on Wikimedia under Creative Commons License.
Sight description based on wikipedia
10

The Hôpital de La Grave is a hospital situated in the Saint-Cyprien quartier of Toulouse. Taking up six hectares, La Grave was the second largest hospital establishment and primary maternal care center of Toulouse during much of the 20th century until the CHU of Rangueil was built. It is named for the sandy bank (French: grève) of the Garonne where it was built.

The hospital was transitioned into a place to confine and care for the city's poor beginning on 26 March 1647. The name was changed to Toulouse l’Hôpital Général Saint-Joseph de La Grave. A Papal Bull granted approval in 1658.

Image by Methos31 on Wikimedia under Creative Commons License.
Sight description based on wikipedia