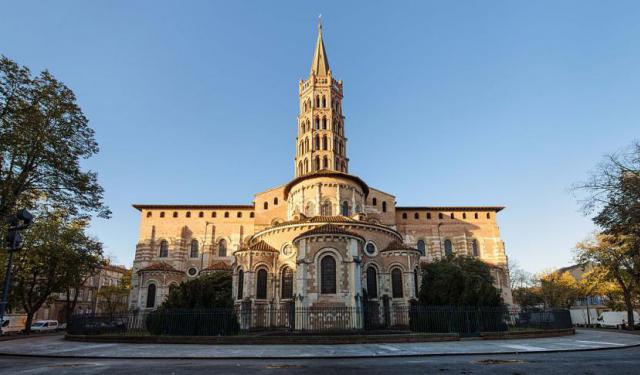 Toulouse's historical center is full of architectural treasures, particularly churches. You will find a large variety of basilicas, cathedrals and cloisters built from the 11th to the 19th centuries in the city. Their architectural style varies from Romanesque to Gothic. Take this self-guided walking tour to visit Toulouse's picturesque churches.
Image Courtesy of Wikimedia and ZbebVial.
How it works: Download the app "GPSmyCity: Walks in 1K+ Cities" from iTunes App Store or Google Play to your mobile phone or tablet. The app turns your mobile device into a personal tour guide and its built-in GPS navigation functions guide you from one tour stop to next. The app works offline, so no data plan is needed when traveling abroad.

Prominent on UNESCO's list of World Heritage Sites is the Basilica of Saint Sernin in Toulouse. The church is on the site of an earlier basilica dating from the fourth century. This older Basilica may have had the bones of Saint Sernin, the first Bishop of Toulouse.

The basilica was built in the Romanesque style in the early 12th century. It was a favorite stop for pilgrims on their way to Santiago de Compostela and even a pilgrimage destination in itself. Construction continued over the centuries with many fits and starts. It is estimated to have been at least four major building undertakings.

Viewed from outside, the bell tower over the transept is the most prominent aspect. It is divided into five tiers. The lower three tiers have Romanesque arches and date from the 12th century. The upper two tiers have pointed Gothic arches from the 13th century. There are two doorways to the Basilica, the Comtes Gate and the Miegeville Gate.

On the Comtes Gate is a scene of Lazarus and Dives. Poor Dives is shown in Hell. Above the Miegeville Gate is sculpture of the ascending Christ. The interior of the Basilica is enormous for a Romanesque church. The nave and the aisles are vaulted with buttresses. Below the transept is a marble altar, consecrated in 1096.

In the middle ages churches were equipped with small chapels in the apse. These chapels would hold relics of interest to the pilgrims who were continually filtering in. The pilgrims could gather at the chapels on the sides of the church without disturbing services in progress. In Saint Sernin's there are nine radiating chapels housing relics.

Why you should visit
To see the reemerging of Cathedrals and shrines throughout the centuries is to witness the no-surrender spirit of the Occitan civilization.

Tips
Generally there is no admission charged but donations are welcome.

This church is located on Rue du Taur between Piazza del Campidoglio and the Basilica of St. Sernin. According to legend, the Church of Notre-Dame du Taur was built on the exact spot where the body of St. Saturnin was detached from the bull that dragged him. The exterior of the church is impressive and resembles a fortress. It was declared a historic monument in 1840.
Image Courtesy of Wikimedia and M.Strīķis.
3

The Augustinian Convent was founded in 1286 for members of the Augustinian religious order. It was first establshed outside the city walls, near the Matabiau quarter, then, between 1310 and 1341 moved to the corner of rue du Musée and rue des Arts. In 1790 it ceased to be a convent and today its buildings house the Musée des Augustins.

In a decree of 2nd November 1789 the convent became a national asset, and was decommissioned during the suppression of the monastic orders in 1790. Since 27th August 1795 it has housed the Toulouse Museum of Art.
Image Courtesy of Wikimedia and Didier Descouens.
Sight description based on Wikipedia.
4

The Cathedral is a Roman Catholic church and it is listed as national monument since 1862. Rumor has it that the cathedral was erected over the remains of a third century chapel built by Saint Saturnin or Sernin. Saint Saturnin was martyred for his trouble but Saint Exuperius honored his memory 150 years later with a cathedral in the same location.

During the French Revolution the cathedral was sacked and reopened as a "Temple of Reason." The inside of the cathedral were unreasonably destroyed and the building was used as a warehouse for scrap iron. By 1802, Napoleon had made up with the Pope, and the cathedral was returned to the Catholic Church. The City of Toulouse made repairs.

The Cathedral is made mostly of brick. The front facing west is made from two unfinished churches from two different times. The oversized buttresses were formed for a choir much higher than the one that was eventually built. There is a bell tower joined with a donjon of fortress-like proportions. The interior of the church is also a source of confusion.

The two sections of the building are not aligned and try to combine two styles of Gothic architecture. A massive pillar stands between the two sections. Stained glass is mainly 19th century, but there is glass salvaged from almost every decade since the 13th century. Still, with all the chaos of its history, the Cathedral is an island of peace.
Image Courtesy of Wikimedia and Didier Descouens.
5

In 410 the Emperor Honorius allowed the conversion of pagan temples within the empire. And so the Temple of Apollo in the city of Tolosa was converted to Christianity. The new church was the original Notre-Dame de la Dalbade. It was replaced in 541 by another Notre-Dame, which served faithfully until burning down in 1442.

The present Notre Dame also served faithfully without serious incident until 1926, when its tower collapsed, destroying much of the church and killing two unlucky bakers on their way to work. The interior was restored. And then Toulouse had a 15th century church with a 20th century inside. The tower was never replaced, which may be a good thing.

Over the entrance is a renaissance tympanum with a copy of Fra Angelico's Coronation of the Virgin. The second Notre Dame was covered with lime. This resulted in a vision of pure whiteness. Many felt this effect was a tribute to the Virgin Mother. After the fire of 1442 the outside was rebuilt with the red brick of Toulouse. Now it was red outside.

Inside, outside, 15th century, 20th century, red, white, in spite of all this, the church stands. The colorful Italian-Renaissance entrance welcoming all who enter. Apollo would have been pleased.
Image Courtesy of Wikimedia and Didier Descouens.
6

Notre-Dame de la Daurade is a basilica established in 410 when Emperor Honorius allowed the conversion of pagan temples to Christian places of worship. The original building of Notre-Dame de la Daurade was a temple dedicated to Apollon. During the 6th century, a church, decorated with golden mosaics, was erected at the site. Its current name derives from the ancient Latin name “Deaurata”, meaning gold. It became a Benedictine monastery during the 9th century.

After a period of decline, which began in the 15th century, the basilica was destroyed in 1761. The buildings were later restored and a new church rebuilt, but the monastery was closed during the French Revolution and became a tobacco factory. The current edifice was built during the 19th century. The church has been listed as a historic monument by the French Ministry of Culture.
Image Courtesy of Wikimedia and Didier Descouens.
Sight description based on Wikipedia.
7

7) Church of the Jacobins (must see)

The Dominican Order had their first convent in Paris on the Saint-Jacques Street. Jaques of course, means "James" and James in Latin is "Jacobus". So the Dominicans were popularly known as "Jacobins." Saint Dominic founded his order in 1215 in Toulouse.

In 1215 the province of Occitan was home to the Cathars, a christian sect thought to be heretical. Dominic hoped to combat this heresy by establishing a preaching brotherhood of monks. In 1230 the Dominican friars began the construction of a small church in Toulouse from which to preach.

Over the centuries the church grew and expanded. A choir, side chapels and a vaulted roof were added. Saint Thomas Acquinas, a dominican monk who was canonized in 1323, was interred in the church by order of Pope Urban V in 1368. During the French Revolution the remains were moved to St Sernin's. They were returned in 1974.

The emperor Napoleon requisitioned the church for a barracks in 1810. The Dominicans had already been forced to leave in 1789. The inside of the church was gutted, floors were put in, stained glass windows destroyed and covered over. Popular revulsion eventually forced the Army to move out in 1861. Restoration began and the church became a museum.

The Church of the Jacobins is in the center of town. Take the metro to the Capitole station and walk west. It is a 5 minute journey by foot. There is a small entrance fee to enter the church.
Image Courtesy of Wikimedia and ignis.