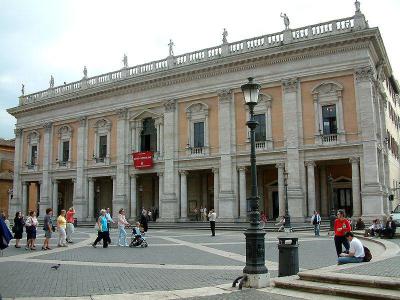 Since then, the museums' collection has grown to include a large number of ancient Roman statues and artifacts; a collection of medieval and Renaissance art; as well as huge collections of coins, jewels, and other items. One would need a lot of time to see all these in their entirety.

Widely known as Capitoline Museums, the Palazzo dei Conservatori and Palazzo Nuovo are the world's oldest public museum body established courtesy of Pope Sixtus IV who gifted Rome with a collection of precious ancient bronze back in 1471. Among the presented items was the mounted statue of Marcus Aurelius, a bronze replica of which adorns the picturesque Piazza del Campidoglio designed by Michelangelo, outside the museum. The original copy is held inside and is one of the few authentic Roman statues preserved. Many of them were destroyed in the Middle Ages, on orders by Christian authorities, but the one of Marcus Aurelius survived, ironically, because they thought, mistakenly, that it was the statue of Emperor Constantine who made Christianity the official religion of Rome.

Along with the ancient statues, the museums also hold a rich collection of Medieval and Renaissance artifacts including coins, jewels, and more.

Both palaces are open to visitors on a single ticket that can be bought at Palazzo dei Conservatori. The two museums are linked with an underground tunnel. Prior to leaving the museums, do give yourself a treat to the rooftop cafeteria for some excellent espresso and the matching view of the Roman Forum with the Colosseum peaking in the background. Quite a sight!

Why You Should Visit:
These museums hold a large number of the most historically precious sculptures in all of Rome: The Dying Gaul; Boy with Thorn, She-Wolf with Romulus and Remus. And that's only the tip of the iceberg.

Tip:
Most important on a summer day: there is air conditioning throughout.