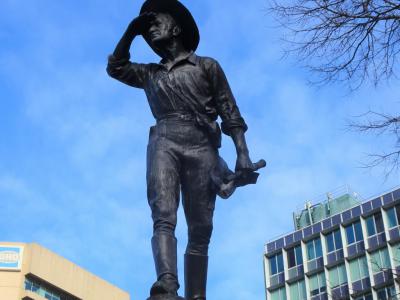 The statue of Captain Charles Napier Sturt (28 April 1795 – 16 June 1869) commemorates the British explorer of Australia, soldier and public servant, who led several expeditions into the interior of the continent from Sydney and Adelaide. The expeditions traced several of the westward-flowing rivers in a bid to determine if there was an "inland sea".

In marked contrast to the staid monuments to Queen Victoria, Charles Cameron Kingston, and John McDouall Stuart, that are also found in Victoria Square, the Sturt monument was considered ‘the most alive’ in Adelaide, when unveiled on 21 December 1916. Standing in the triangular piece of garden in the north-west corner of the square, the life-size bronze statue depicts Sturt leaning forward, shielding his eyes from the sun with a raised right hand, as he peers into the distance.

Appropriately for an outback explorer, he's represented not in the finery, but in the rough clothing – pants and worn knee boots, with the sleeves of his open-necked shirt rolled up to the elbow, and a broad brimmed hat covering his head. In his left hand Sturt carries the tools of trade: a telescope and crumpled map; plus a compass hung on his belt, and a water bottle slung over his shoulder. Fixed to the pedestal (made of Murray River granite and Angasion marble) are the bronze plaques detailing important historical facts about Sturt, his main explorations, and members of his party.

The statue was created by the English sculptor and artist, Adrian Jones, using photographs from Sturt's daughter, Charlotte. The commissioning of the monument was not without controversy though, as Stunt's representation of was not favoured by the committee, but was insisted upon by his daughter.
Image Courtesy of Flickr and denisbin.