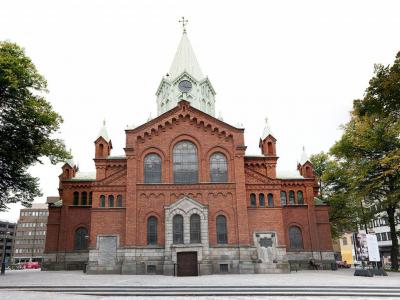 Caroli Kyrka (Caroli or Charles Church) is a former church in Malmo, named after king Charles XI of Sweden. The first Caroli Church on this site was built in 1680. Back then, it was also known as "The German Church" for serving the large community of German merchants and craftsmen living in the city. For the same reason, all the services there were held in German, up until 1778. In 1831 they switched to Swedish.

In 1879, when the parish was completely Swedish, they decided to demolish the old church – too small for the enlarged congregation – and build a new one. For financial reasons, the construction budget initially allocated to Caroli Church, and eventually perceived rather costly, was split between Caroli and the nearby St. Paul's churches.

The new Caroli Church was completed in 1880, based on the design by the famous Stockholm architect, Emil Viktor Langlet, who also designed St. Paul's Church. The similarities between the two – the shapes, high metal roofs and pointed towers – are obvious. This type of building is called “central church” and is inspired by the Eastern Round Churches. The red brick building has a mint green metal roof with the tower in the middle topped by a Greek cross. Outside, there are memorial plaques to Frans Suell, successful merchant and entrepreneur, and his wife Anna.

The only thing left of the old German church is the plinth and portals. Caroli parish within the Church of Sweden ceased in 1949. Throughout 2000-2009, the building was rented to the Malmo Academy of Music, which held concerts on the premises. The church was finally desecrated in 2010 and is no longer used for religious services. At some point, there were talks about it becoming a residential building.
Image Courtesy of Wikimedia and Crescent.
Sight description based on Wikipedia.