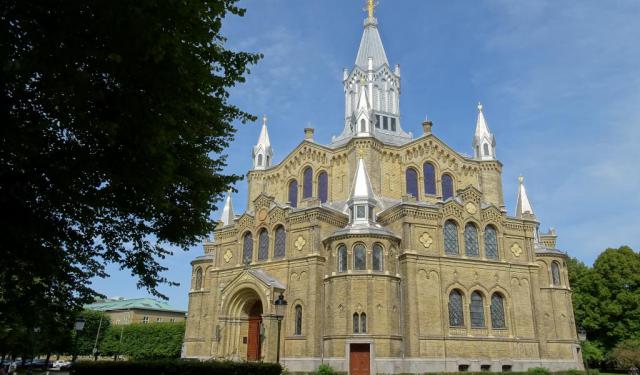 The Old Town with its cobblestone squares (home to open-air bars, restaurants and cafés), as well as historical buildings, dating as far back as the early 14th century, attract many a tourist (especially those from the neighboring Denmark) to this Swedish coastal city.

Malmo's architecture has a distinctive character, characterized, among other things, by brick facades, and determined by influences from Denmark and Germany. Many local architects studied in Berlin and gained insight there into the latest developments at the turn of the 20th century.

Here are some of the most impressive historical buildings found in this part of Sweden:

Malmo Radhus – an imposing two-story City Hall building, the largest of its kind from the 16th century, and the most important edifice in Malmo;

Apoteket Lejonet (Lion Pharmacy) – built in 1896, another of Malmo's most distinctive landmarks; formerly one of Europe's largest pharmacies;

Ebbas Hus (Ebbas House) – the smallest museum in Malmo, built in the 1700s;

Malmo Synagoga – the city's only one synagogue, built in 1903 in the distinctive Moorish style.

For a more detailed acquaintance with these and other historical buildings of Malmo, take this self-guided walking tour.
Image Courtesy of Flickr and Sjaak Kempe.
How it works: Download the app "GPSmyCity: Walks in 1K+ Cities" from iTunes App Store or Google Play to your mobile phone or tablet. The app turns your mobile device into a personal tour guide and its built-in GPS navigation functions guide you from one tour stop to next. The app works offline, so no data plan is needed when traveling abroad.

Malmo City Hall was originally built between 1544 and 1547. At that time, Malmo was one of Northern Europe's biggest cities. The impressive two-story building was the largest town hall of the 16th century.

The vaulted cellars still reflect the style of the Middle Ages. Today, the cellar hosts the popular Rådhuskällaren restaurant.

The Knutt Hall was inspired by the Hall of Mirrors in Versailles Palace. The impressive Knutt Hall hosts balls and special events. Another ornately decorated room, the Bernadotte room, is reserved for royal and diplomatic guests.

Lion Pharmacy was built in 1896 and is one of Malmo's most distinctive landmarks. The pharmacy owner, John Tesch, wanted the building to be eye-catching. When construction was completed, Lion Pharmacy was one of Europe's largest pharmanies.

The pharmacy is also known as Tesch's palace. John Tesch had apartments in the pharmacy and even had a very modern elevator to reach his apartments.

In the 18th and 19th centuries, each pharmacy in Sweden was assigned an animal symbol to differentiate the pharmacies. This pharmacy was awarded the lion symbol and is known as Lion Pharmacy.

The Lion Pharmacy has a beautiful art-nouveau interior. It features meticulously carved wooden shelves with vintage medicine bottles and a stunning glass-plated ceiling.

The facade also features John Tesch's bust and a fabulous relief of cherubs acting as pharmacists.
Image Courtesy of Wikimedia and Jiří Komárek.
3

After the original tower collapsed in 1420, a new tower was built. The tower was renovated in 1442 and 1890. The imposing tower is 98 meters (322 feet) tall. During the 15th and 16th centuries, five side chapels were built. Three of the side chapels survive today. The church porch was built in the 15th century.

Swedish scholar and architect Carl Georg Brunius renovated the church in the 1800s. The roof was replaced with a copper roof, and many bricks were replaced. In addition, the church was renovated several times in the 1900s.

The interior is dominated by its 25-meter tall (82 foot) nave. The whitewashed interior features beautiful medieval murals from the 15th and 16th centuries.

The pulpit was inaugurated in 1599. It was crafted with black limestone, light sandstone, and gilt and features scenes from Christ's life.

Similar to the pulpit, the baptismal font was crafted from black limestone and dedicated in 1601. The octagonal font features Biblical scenes.

St. Peter's has a 1951 organ with an older facade. The church's small library houses books from the 16th century.
Image Courtesy of Wikimedia and Fred J.
4

Caroli Kyrka (Caroli or Charles Church) is a former church in Malmo, named after king Charles XI of Sweden. The first Caroli Church on this site was built in 1680. Back then, it was also known as "The German Church" for serving the large community of German merchants and craftsmen living in the city. For the same reason, all the services there were held in German, up until 1778. In 1831 they switched to Swedish.

In 1879, when the parish was completely Swedish, they decided to demolish the old church – too small for the enlarged congregation – and build a new one. For financial reasons, the construction budget initially allocated to Caroli Church, and eventually perceived rather costly, was split between Caroli and the nearby St. Paul's churches.

The new Caroli Church was completed in 1880, based on the design by the famous Stockholm architect, Emil Viktor Langlet, who also designed St. Paul's Church. The similarities between the two – the shapes, high metal roofs and pointed towers – are obvious. This type of building is called “central church” and is inspired by the Eastern Round Churches. The red brick building has a mint green metal roof with the tower in the middle topped by a Greek cross. Outside, there are memorial plaques to Frans Suell, successful merchant and entrepreneur, and his wife Anna.

The only thing left of the old German church is the plinth and portals. Caroli parish within the Church of Sweden ceased in 1949. Throughout 2000-2009, the building was rented to the Malmo Academy of Music, which held concerts on the premises. The church was finally desecrated in 2010 and is no longer used for religious services. At some point, there were talks about it becoming a residential building.
Image Courtesy of Wikimedia and Crescent.
Sight description based on Wikipedia.
5

Ebba Hus (Ebba's house) is the smallest museum in Malmo. This street house was built some time in the 18th century by an ordinary family, and as such represents an ideal example of typical household in Malmo of that period.

The last resident, lace maker Ebba Olsson, lived here for most of her life. Her grandfather, city surveyor Jöns Olsson, bought the house in 1873, and her father, Olof, also a city surveyor, inherited the property in 1911. The family consisted of Olof and Anna Olsson and their children Ebba and Thure. Ebba lived in this home together with her parents until the last one of them died in 1961, upon which she continued living here by herself.

The surrounding cityscape changed eventually, with many of the surrounding buildings demolished during the 1960s, but Ebba Olsson refused to sell. She lived in the same house, with an outdoor toilet in the yard and cold water until 1984, when she finally moved to a modern apartment. Eventually, she and her sister-in-law donated the house to Malmo Museums.

The latter sought to use the property for educational purposes – to demonstrate what life was like back in the day. When Ebba died in 1989, the museum bought her furniture and placed it in the house where it originally had stood. In 1991, Ebba's house was opened to visitors. The interior, complete with all commodities and furniture, as well as the wood stove and outdoor toilet, all date back to the 1910s and are well preserved in their entirety.
Image Courtesy of Wikimedia and jorchr.
Sight description based on Wikipedia.
6

St. Paul's Church in Malmo was designed by Emil Viktor Langlet, and constructed from 1879 to 1882.

In accordance with the Christian tradition, it was built near a body of water – a shallow lake, Östra Rörsjön, that was once located outside Malmo Fortress – and from where the baptismal water could be taken. Set on the large piles in the soggy soil, the foundation now sinks a few centimeters every year. The church's cemeteries, for the same reason, had to be placed some distance away, in the southeast, to avoid the spread of diseases.

The church is built of yellow brick, and has a hexagonal shape with a big tower in the middle, symbolizing Jesus, surrounded by twelve smaller towers that symbolize his disciples. At the top of the main tower is a gold cross with a wreath to remind us of the flame of the Spirit of God and the first day of Pentecost.

Originally made of copper and painted gray, the roof was later repainted in green, thus creating the illusion of patina. In 2013, the roof was redone in aluminum, whose silvery color is eventually expected to matt to a shade of gray, similar to the original. The church itself is quite spacious, enough room to accommodate up to 1200 people.

Inside, a baptismal and devotional chapels are decorated with elaborate paintings depicting various Biblical stories and scenes from the apostolic works. The illumination is done by Art Nouveau lamps from the 1920s. The church has a communion jug, donated by King Oscar II. The side chapel windows were painted in the 1950s. In the right side chapel there is also a memorial plaque with the names of the parishioners who perished at sea during World War II.
Image Courtesy of Flickr and Teresa Grau Ros.
Sight description based on Wikipedia.
7

Synagogbyggnaden – Malmo Synagogue – is an Orthodox synagogue, the only one in the city. In fact, this is also one of the few remaining synagogues in Europe built in the Moorish style (mixed with Art Nouveau), same as most of those in Germany destroyed during Kristallnacht (Crystal Night) back in 1938.

The Malmo Synagogue was designed by the local architect John Smedberg, and built and consecrated in 1903. Its outer walls are decorated with lotus flowers, and the number eight, "the Lord's voice", present in the decoration, symbolizes eight days in which the temple was consecrated. Upon its inauguration, this was Malmo's first non-Christian place of worship.

For the synagogue's 100th anniversary, a special Centenary Book was published, called “The Temple Stone fell on Föreningsgatan. Malmo Synagogue's 100 years,” written by Jan Mark and Claes Fürstenberg, with pictures by Merja Diaz.

The synagogue welcomes study visits with an advanced notice.
Image Courtesy of Wikimedia and jorchr.
Sight description based on Wikipedia.