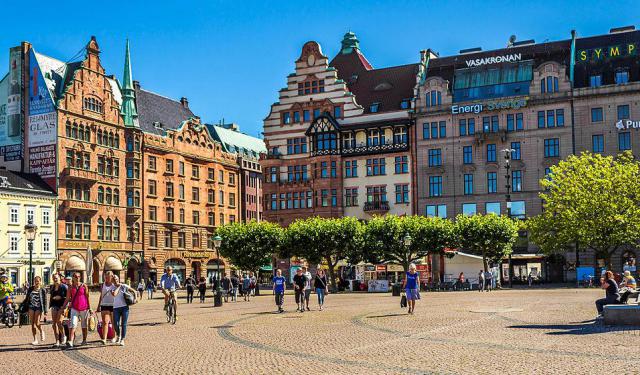 Image by Christian Beiwinkel on Wikimedia under Creative Commons License.

Charming Little Square is a local's favorite, with Swedish shops and exciting nightlife. If you love shopping, check out Sodergatan Street. The cobblestone street is pedestrian-only and features a mix of shops, restaurants, and bars.

Malmo Castle was originally built in 1434. The current architecture reflects the 16th century Renaissance re-build. Visitors are welcome to tour the castle and visit the Art Museum and Natural History Museum exhibits.

Take this self-guided tour and enjoy Malmo's most notable sights.
How it works: Download the app "GPSmyCity: Walks in 1K+ Cities" from iTunes App Store or Google Play to your mobile phone or tablet. The app turns your mobile device into a personal tour guide and its built-in GPS navigation functions guide you from one tour stop to next. The app works offline, so no data plan is needed when traveling abroad.

Main Square was first created in 1540 and is the largest and oldest square in Malmo. In its heyday, it was also the largest market square in Northern Europe. Mayor Jörgen Kock created the square by demolishing the old Catholic Church and monastery after the Reformation.

From the 16th to the 19th century, the square was home to a central city fountain. This fountain provided drinking water to many city businesses and homes through wooden pipes. Today, an ornamental fountain is in its place.

The square is home to many historical buildings, including Malmo City Hall, the Kocksa Huset, and the Lion Pharmacy.

Main Square frequently hosts large events such as the popular week-long Malmo Festival in the summer. The festival features culture, art, and music and hosts over one million visitors each year.


Image by Christian Beiwinkel on Wikimedia under Creative Commons License.
2

Malmo City Hall was originally built between 1544 and 1547. At that time, Malmo was one of Northern Europe's biggest cities. The impressive two-story building was the largest town hall of the 16th century.

The vaulted cellars still reflect the style of the Middle Ages. Today, the cellar hosts the popular Rådhuskällaren restaurant.

The Knutt Hall was inspired by the Hall of Mirrors in Versailles Palace. The impressive Knutt Hall hosts balls and special events. Another ornately decorated room, the Bernadotte room, is reserved for royal and diplomatic guests.
Image by Paul N. Richter on Wikimedia under Creative Commons License.
3

After the original tower collapsed in 1420, a new tower was built. The tower was renovated in 1442 and 1890. The imposing tower is 98 meters (322 feet) tall. During the 15th and 16th centuries, five side chapels were built. Three of the side chapels survive today. The church porch was built in the 15th century.

Swedish scholar and architect Carl Georg Brunius renovated the church in the 1800s. The roof was replaced with a copper roof, and many bricks were replaced. In addition, the church was renovated several times in the 1900s.

The interior is dominated by its 25-meter tall (82 foot) nave. The whitewashed interior features beautiful medieval murals from the 15th and 16th centuries.

The pulpit was inaugurated in 1599. It was crafted with black limestone, light sandstone, and gilt and features scenes from Christ's life.

Similar to the pulpit, the baptismal font was crafted from black limestone and dedicated in 1601. The octagonal font features Biblical scenes.

St. Peter's has a 1951 organ with an older facade. The church's small library houses books from the 16th century.
Image by Fred J on Wikimedia under Creative Commons License.
4

Lion Pharmacy was built in 1896 and is one of Malmo's most distinctive landmarks. The pharmacy owner, John Tesch, wanted the building to be eye-catching. When construction was completed, Lion Pharmacy was one of Europe's largest pharmanies.

The pharmacy is also known as Tesch's palace. John Tesch had apartments in the pharmacy and even had a very modern elevator to reach his apartments.

In the 18th and 19th centuries, each pharmacy in Sweden was assigned an animal symbol to differentiate the pharmacies. This pharmacy was awarded the lion symbol and is known as Lion Pharmacy.

The Lion Pharmacy has a beautiful art-nouveau interior. It features meticulously carved wooden shelves with vintage medicine bottles and a stunning glass-plated ceiling.

The facade also features John Tesch's bust and a fabulous relief of cherubs acting as pharmacists.
Image by Jiří Komárek on Wikimedia under Creative Commons License.
5

As its name suggests, Little Square is a small but charming square. The square was created in 1590 as a marketplace square. Shoppers would visit the square to buy daily household goods. Local maids would shop for meat, freshly baked bread, fish, and general groceries.

The square is paved with natural stones and invites locals and tourists to stay and enjoy the cozy atmosphere.

Little Square is known for its nightlife. Check out Drumbar, Malmo's only Scottish pub. Moosehead Bar often shows international sports. Mello Yello has a yellow outdoor seating area and is one of Malmo's most popular spots for eating, drinking, and people-watching.

Hedmanska Garden is located on the south side of the square. This half-timbered house dates to the 1590s. The house's courtyard is home to the Form/Design Center, which features a gallery and exhibitions.
Image by Allie_Caulfield on Flickr under Creative Commons License.
6

Sodergatan is Malmo's main shopping street. The pedestrian-only street is home to a large variety of stores.

Visitors will find budget-friendly brands, high-end fashion, and vintage clothing. In addition, the cobblestone street is also home to many cafes, restaurants, and bars.

Sodergatan is also one of Malmo's oldest streets. It was first known as Sönnergatan in 1462. Over the years, the street has had many name changes until it was finally named Södergatan in 1842.

The buildings along Sodergatan feature architecture from the 16th century up to the present day. Flensburgska Huset was constructed on Sodergatan Street in the late 16th century. Flensburgska Huset is the oldest building in Malmo and features layers of white stone and red brick. Baltzar City is one of the street's newest buildings, dedicated in 2002.

Visitors to Sodergatan Street can also find the famous Optimistorkestern sculpture. This charming artwork shows a marching band led by a drummer.
Image by David Hall on Flickr under Creative Commons License.
7

The famous 1913 Playing Children sculpture stands in the middle of the square. Artist Anders Jönsson created the sculpture, featuring children grouped around a fountain.

Another artwork is situated on the east side of the square. Five fountains and A Ball is a modern artwork created in 2000 by Sivert Lindblom. The artwork features five bronze fountains and a large ball.

The open area of the square is often used for markets and events such as the Malmo Festival.

The Old Graveyard was consecrated in 1822. The Cemetary was originally called the New Cemetery until 1870, when St. Pauli's northern cemetery was built.

The Old Graveyard is a peaceful place to walk and explore Malmo's history. Visitors and locals often stop to read grave inscriptions and learn about Malmo's residents. The gravesites have a variety of memorials and dedications ranging from simple stones to more elaborate memorials with statues and inscriptions.

Visitors will also find an interesting sculpture created by famous Swedish artist Carl Milles. The sculpture depicts an angel looking up towards an arch. God the Father stands at the end of the arch and is depicted arranging the stars of heaven.
Image by Lomita on Wikimedia under Creative Commons License.
9

King Oscar II opened King's Park in 1872. The site used to be part of Malmo Castle, and the park is Malmo's oldest. Architect Ove Høegh Hansen designed the romantic park, which was inspired by English parks. King's Park is a wonderful place to walk, explore, or enjoy a picnic on the extensive grounds.

KIng's Park features ponds, ancient trees, and beautiful landscaping. The park is home to over 130 mature exotic trees from around the world. In addition, visitors will find an organic vegetable garden.

An 1882 cast-iron fountain stands at the center of the park. In addition to the fountain, there's an old man-made cave. This cave was the park's main attraction when the park first opened. The cave was renovated in 1987 and now features a fountain depicting Ormet's snakehead.

The legend behind the fountain comes from the Icelandic Edda, a collection of ancient Nordic poems. It tells the story of the giant Loki's punishment for murdering Balder. Loki was tied under a serpent, Ormet, who dripped poison on him. The fountain drips water from the snake's tongue to a carved bowl below. The height difference makes each drop dramatic.

The first Malmo Castle was built in 1434, when Sweden, Denmark, and Norway were united under one king. The alliance dissolved, and Malmo became a part of Denmark. After the castle was partially demolished in battle, King Christian III of Denmark built a new castle in the 1530s. Malmo Castle is Scandinavia's oldest preserved Renaissance castle.

From 1568-1573, James Hepburn, the 4th Earl of Bothwell, was imprisoned here. James Hepburn was Mary, Queen of Scots' third husband. He was suspected of the murder of Mary's second husband but had been released from the Tower of London.

After the Swedes gained control of Malmo, they modernized the castle in 1658 with a new defense system, including the moat. Over later centuries, the castle fell into disrepair and was used as a granary and an arsenal. The castle functioned as a prison from 1828 until 1909. In the 1930s, the castle was restored to reflect Renaissance style.

Visitors can see the royal rooms with ancient portraits. Don't miss the Bible in the entrance hall. This Bible belonged to Christian IV of Denmark and was printed in 1633.

The Castle tells the story of Malmo's intriguing history. Visitors could spend a whole day at Malmo Castle between the castle and the museum exhibits.

One entrance fee covers access to the castle and both museums. Be sure and grab an English language guide at the entrance as most of the exhibits are not translated.
Image by Allie_Caulfield on Flickr under Creative Commons License.

Shopping in Malmo is an interesting experience that shouldn’t be missed. There are many clothing stores of local and international designers, a great number of art galleries where exclusive art works and handicrafts, signed by Swedish artists, can be purchased. There are many other souvenirs as well. Take this self-guided walking tour to discover the most interesting shopping places in Malmo.