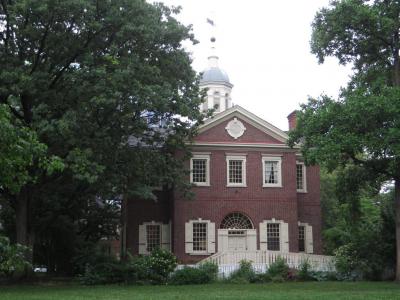 Everyone knows about the Second Continental Congress that signed the Declaration at Independence Hall, but hardly anyone ever talks about the First Continental Congress which, of course, was super important, as it marked the first time that the 13 Colonies got together (well, as many as possible) in one spot in defiance of British rule. This is where Ben Franklin and others secretly met – keeping all shutters closed in the summer heat – with the first French contacts to discuss French support for the American Revolution. So, for that fact alone, this location is very important to the nation's founding history. It was also host to such venerable institutions as Franklin's Library Company, The American Philosophical Society, as well as the First and Second Banks of the U.S., that later established themselves at other locations.

However, it was also (and still is) the actual structure built by and for the Carpenters' Guild, and the exhibits inside reflect primarily the "carpenter" aspect, although there is also some information about the First Congress. Both aspects of the building are very interesting indeed, and the Hall itself is quite splendid to see. There is a replica Speaker's chair (from the First Congress) you can sit in, and there are explanatory signs around the perimeter – though staff inside is excellent and can answer any question you would have concerning the property. No charge here but visitors can purchase interesting gifts in the well-stocked shop. The grounds are quite lovely, too.

Tip:
Spend some time outside at the Storytelling Bench, listening to the wonderful storyteller. The benches are really a wonderful idea and it's fun to look for them!