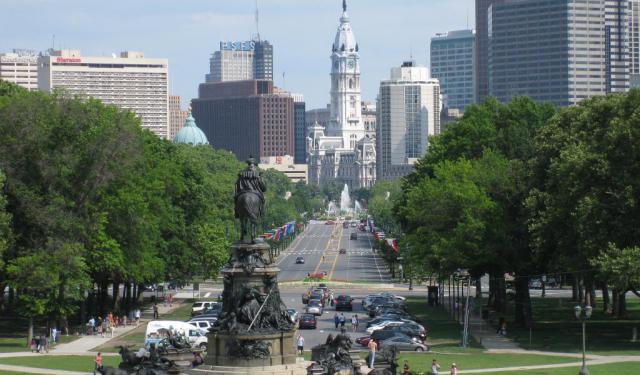 Benjamin Franklin Parkway, is a scenic boulevard that runs through the cultural heart of Philadelphia. Named for Founding Father Benjamin Franklin, the mile-long tree-lined Parkway features many beautiful sculptures and fountains, and several world class museums. Follow this self guided walk to appreciate its beauty and explore the fine cultural institutions along the way.
Image Courtesy of Flickr and elPadawan.
How it works: Download the app "GPSmyCity: Walks in 1K+ Cities" from iTunes App Store or Google Play to your mobile phone or tablet. The app turns your mobile device into a personal tour guide and its built-in GPS navigation functions guide you from one tour stop to next. The app works offline, so no data plan is needed when traveling abroad.

Logan Circle, also known as Logan Square, is an open-space park in Center City Philadelphia's northwest quadrant and one of the five original planned squares laid out on the city grid. The circle itself exists within the original bounds of the square; the names Logan Square and Logan Circle are used interchangeably when referring to the park. The park is the focal point of the eponymous neighborhood. Originally called "Northwest Square," the park had a somewhat gruesome history as a site of public executions and burial plots until the early Nineteenth Century.

In 1825, it was renamed Logan Square after Philadelphia statesman James Logan. In June 1864, temporary buildings were built on the square and it was the site of the Great Sanitary Fair, a 2-week exposition that raised US$1,046,859 to buy medicine and bandages for Union troops during the American Civil War. President Abraham Lincoln visited the fair.

Image Courtesy of Wikimedia and Ken Thomas.
Sight description based on Wikipedia.
2

In 1892 John Sartain came forth to the Fairmount Park Art Association with a proposal to raise funds via public and private subscription to build a Shakespeare monument. By 1917 funds had been obtained, and Alexander Stirling Calder was charged to do the job. The original site in front of the Free Library was collegially selected by the Art Association and the Shakespeare Memorial Committee representatives, assisted by architects Gilbert McIlvaine, Paul Cret, and Jacques Gréber.

The sculpture, made in 1926 at the Roman Bronze Works, was unveiled to the public on Shakespeare's birthday in 1929. The monument features two figures, representing Comedy and Tragedy. The former is that of Hamlet with his head leaned against the hand holding a knife, and the latter is Touchstone, the jester, sitting at his feet, and bursting with laughter. Engraved beneath is the famous line from As You Like It, "All the world's a stage and all the men and women merely players."

3) All Wars Memorial to Colored Soldiers and Sailors

The All Wars Memorial to Colored Soldiers and Sailors was commissioned in 1927 by Pennsylvania's African-American legislator, Samuel Beecher Hart. Created by Swiss sculptor J. Otto Schweizer, the memorial was to be a tribute to African American war heroes, but was originally relegated to a remote location in Fairmount Park, where it remained virtually unseen for many years. The Philadelphia Arts Jury and the Committee to Restore and Relocate lobbied elected officials until it was finally relocated to its current location in November 1994.
Image Courtesy of Wikimedia and Daderot.
Sight description based on Wikipedia.
4

The Franklin Institute (named after the noted American scientist and statesman Benjamin Franklin) is a museum in Philadelphia, and one of the oldest centers of science education and development in the United States, dating to 1824. The Institute also houses the Benjamin Franklin National Memorial.

The Science Center offers exhibition aimed for both adults and kits. The first floor is very space-oriented and it has a Planetarium. The second floor has the gift shop and two exhibits about the brain and heart, which are fun, interactive, and educative. The third floor has an exhibition on inventions and machines, which offers fun educative games. The fourth floor is the observatory where you can look through a big telescope.

The Budd BB-1 Pioneer, in front of the museum, was the first stainless steel airplane built by the Edward F. Budd Manufacturing Corporation and has been on display since 1935. Starting 1824, The Franklin Institute has maintained the longest continuously awarded science and technology awards program in the United States, and one of the oldest in the world.

Image Courtesy of Wikimedia and Wynnewood500.
Sight description based on Wikipedia.
5

Benjamin Franklin National Memorial — located in the rotunda of The Franklin Institute in Philadelphia, Pennsylvania — features a colossal seated statue of Benjamin Franklin. The 20-foot (6.1 m) high memorial, sculpted by James Earle Fraser between 1906 and 1911, honors the writer, inventor and American statesman. The statue weighs 30 short tons (27 t) and sits on a 92-short-ton (83 t) pedestal of white Seravezza marble. The statue is the focal piece of the memorial hall, designed by John T. Windrim after the Pantheon, dedicated in 1938.
Image Courtesy of Wikimedia and Daderot.
Sight description based on Wikipedia.
6

The Barnes Foundation is an art collection and educational institution promoting the appreciation of art and horticulture. Originally in Merion, the art collection moved in 2012 to a new building on Benjamin Franklin Parkway in Philadelphia.

The Barnes was founded in 1922 by Albert C. Barnes, who made his fortune by co-developing Argyrol, an antiseptic silver compound that was used to combat gonorrhea and inflammations of the eye, ear, nose, and throat. He sold his business, the A.C. Barnes Company, just months before the stock market crash of 1929.

Today, the foundation owns more than 4,000 objects, including over 900 paintings, estimated to be worth about $25 billion. These are primarily works by Impressionist, Post-Impressionist, and Modernist masters including many Renoirs, Cezannes, Picassos, and a large mural by Henri Matisse painted especially for The Barnes. The Barnes collection also includes many other paintings by leading European and American artists, as well as African art, antiquities from China, Egypt, and Greece, and Native American art.

The Rodin Museum is an art museum located in Philadelphia that contains one of the largest collections of sculptor Auguste Rodin's works outside Paris.

The Museum was the gift of movie-theater magnate Jules Mastbaum (1872–1926) to the city of Philadelphia. Mastbaum began collecting works by Rodin in 1923 with the intent of founding a museum to enrich the lives of his fellow citizens. Within just three years, he had assembled the largest collection of Rodin's works outside Paris, including bronze castings, plaster studies, drawings, prints, letters, and books. In 1926, Mastbaum commissioned French architects Paul Cret and Jacques Gréber to design the museum building and gardens. Unfortunately, the collector did not live to see his dream realized, but his widow, Etta Wedell Mastbaum honored his commitment to the city, and the Museum opened on November 29, 1929. Murals in the museum were executed by the painter Franklin C. Watkins.

The best-known of Rodin's works, The Thinker (1880–1882), sits outside the museum in the entry courtyard. Visitors once entered through a cast of The Gates of Hell, located at the main entrance to the museum, which is no longer used. This massive 5.5-m-tall bronze doorway was originally created for the Museum of Decorative Arts (which was to have been located in Paris but never came into existence). Rodin sculpted more than 100 figures for these doors from 1880 until his death in 1917. This casting is one of the three originals. Several of Rodin's most famous works, including The Thinker, are actually studies for these doors which were later expanded into separate works.

The Philadelphia Museum of Art is among the largest art museums in the United States. It is located at the west end of the Benjamin Franklin Parkway in Philadelphia's Fairmount Park. The Museum was established in 1876 in conjunction with the Centennial Exposition of the same year. Originally called the Pennsylvania Museum and School of Industrial Art, its founding was inspired by the South Kensington Museum (now the Victoria and Albert Museum) in London, which grew out of the Great Exhibition of 1851. Each year the Museum puts on 15 to 20 special exhibitions and is visited by 800,000 people.