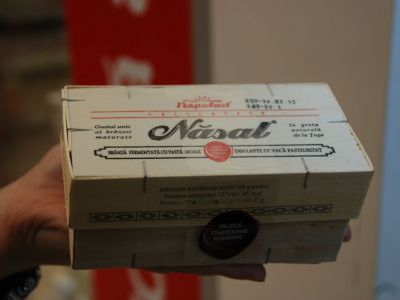 What to buy here: Nasal Cheese. Price around $17-20. This Romanian delicacy has a story of its own. And as any delicacy, it is unique in its own right. This type of ripened white mould cheese is produced in the Transylvanian county of Cluj, at Taga. But if you imagine tiny shops where people make this cheese, you’d be wrong. This cheese is produced in a cave nearby Nasal, in Taga, and the legend has it that once upon a time, a handful of the local count’s not exactly loyal servants stole some fresh cheese from the count’s castle and hid it in the Taga cave, for fear of not being caught. They left the cheese there and returned after a while. And what they found became a legendary culinary delicacy Romanians like to enjoy at elegant dinners and social gatherings. The Nasal cheese resembles Camembert or Brie cheeses and is best savored in the company of a rich red wine. Its special taste is due to the bacteria found in the cave mould and to the temperature conditions of the Taga cave. Experts consider that this microclimate responsible for the creation of the Nasal cheese is impossible to replicate in other parts of the world. And that makes the taste of this national delicacy absolutely one of a kind. Literally. Although it is unique, it is not difficult to be found, since one of the top market producers of dairy products, Napolact, is in charge with its production and distributes Nasal cheese on a national level, in large retail chains.
Image by Delia Zahareanu under Creative Commons License.