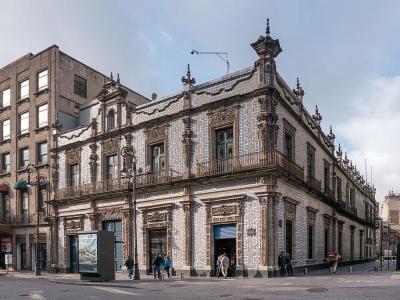 It's impossible not to spot this lavish colonial-era palace with its striking three sides completely covered in blue and white tiles. After extensive restoration, the property was converted into a a café-restaurant for the Sanborns chain (owned by Carlos Slim, one of the world's richest men), where locals linger over coffee.

There are two conflicting explanations of how the building got its current appearance. The more reliable version states that a countess who resided in Puebla decided to return to the capital after her husband's death and remodeled the house with Puebla tile in 1737, to show the family's immense wealth. The other version is more colorful and tells of a son whose lifestyle caused his father to state that if he didn't change his ways he would "never build his house of tiles", i.e. he would never amount to anything. As an act of defiance, the young man had the tiles put on when he inherited the house.

Inside, the main courtyard contains a graceful fountain surrounded by highly decorated columns and topped with mosaics and porcelain crowns, as well as a stained glass roof that was added in the 20th century. The overall look to the courtyard is generally Baroque, but also somewhat Oriental or Mudéjar.

Tip:
Food is reasonable and affordable, but the building is the star of the show, with the grandest toilet entrance you'll have ever seen! The upstairs balcony is an ideal spot to take in the atmosphere and grandeur of the house as you eat.