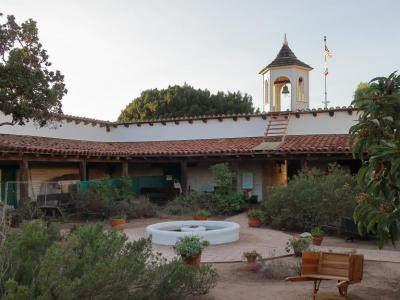 Considered the finest of its day in Mexican California, this most elaborate "casa" – one of the oldest examples of Spanish architecture in the country – was built by the Presidio's commander, José Estudillo, in the 1820s, and is still thought of as the Old Town's showpiece.

By the early 1900s, the building was almost in ruins, but the one-story abode has since been restored well enough to maintain a very authentic feel, containing eclectic period furnishings from the 16th to the 20th century. It boasts several bedrooms, a beautiful formal living room, and a quaint chapel in addition to kitchens, dining rooms, storage and work rooms, and a lovely courtyard. All rooms come with displays and descriptions that explain their former use.

Helen Hunt Jackson's enormously popular novel "Ramona", first published in 1884, may or may not have been inspired by or set at the Estudillo, but the book's popularity apparently helped save the structure when it was declared as the "Ramona's Marriage Place" by the local newspaper San Diego Union in a front page article in 1887.

Estudillo House is a historic adobe house and is designated as a National Historical Landmark in its own right. Jackson's novel made it a very romantic location for the Ramona's fans.
Image Courtesy of Flickr and cultivar413.