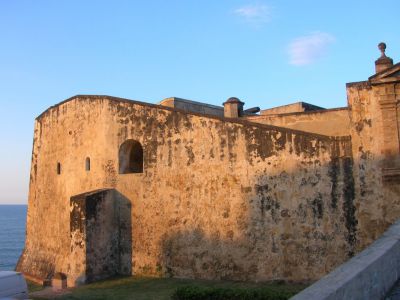 Standing guard at the eastern gate, north of Columbus Square, is an imposing 18th century fortress, called Fort San Cristóbal. Contrary to her sister, El Morro, designed to protect from attacks by sea, the San Cristóbal guarded the city from enemy approaches by land, creating a crossfire with El Morro over the bay. Meant to strengthen Spanish position in the face of imminent English and Dutch invasion, construction of the citadel began in 1634.

The fort was named San Cristóbal in celebration of the Spanish victories ejecting English and Dutch interlopers from the island of this name in the Lesser Antilles, which was then part of the insular territorial glacis of Puerto Rico.

When finished in 1783, the Fort San Cristóbal covered nearly 27 acres of land and practically wrapped around the whole of San Juan, with the entry to the city sealed by the San Cristóbal's double gates. After almost 100 years of relative peace, about a third of the fortification was demolished in 1897 to help ease the flow of traffic in and out of the walled city.

Why You Should Visit:
San Cristóbal is the largest fortification ever built by the Spanish in the New World, where the first shots of the Spanish-American War were fired. If you're a keen photographer, San Cristobal is a goldmine of panoramic views of the coast, from Old San Juan to Condado and beyond.

Tip:
Guided tours by local rangers visit the extensive tunnel system connecting various sections of the fort. There is an exhibition of military clothing. Be sure to visit the overlook for the Devil's Sentry Box or the "Garita del Diablo", from which, according to legends, soldiers mysteriously disappeared. Tickets to San Cristobal or El Morro can be used to enter either of the forts.

Operation Hours:
Everyday from 9:00 am to 6:00 pm.
Image by Clueder on Wikimedia under Creative Commons License.
Sight description based on wikipedia