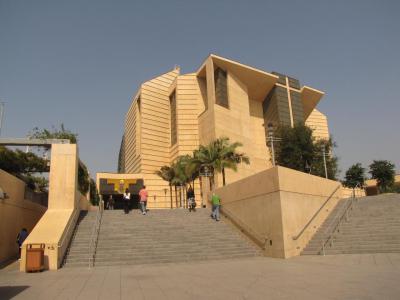 Cathedral of Our Lady of the Angels, Los Angeles

The Cathedral of Our Lady of the Angels is the Mother Church of the Archdiocese of Los Angeles and holds the seat of the Archbishop. It is a Roman Catholic Church unlike any other you will see in the city.

The church was built in 2002 to replace the Cathedral of St Vibiana which was damaged during an earthquake in 1994. The plans to demolish the old cathedral to build the new were stopped by conservationists, who wanted the new church incorporated into the old. This was impossible if the building was to meet with seismic laws, so a new site was found.

Built by the architect Rafael Moneo, the church is startlingly postmodern, with no right angles and a base isolated structure. The windows are of alabaster instead of stained glass and the doors are in sculpted bronze. The interior is softly lit and you can admire tapestries of the Communion of Saints by John Nava, a postmodern statue of the Virgin Mary by Robert Graham and a huge pipe organ, 60 ft high and set 24ft off the ground. The 6019 pipes include many from the 1929 organ from the Cathedral of St Vibiana.

The church stands on a 6-acre plaza with gardens, fountains, a mausoleum with 1270 crypts, a gift shop, a cafeteria, and a conference center.

Tip:
Do go in – they have wonderful music, and you might be fortunate enough to have an organist give you a recital!