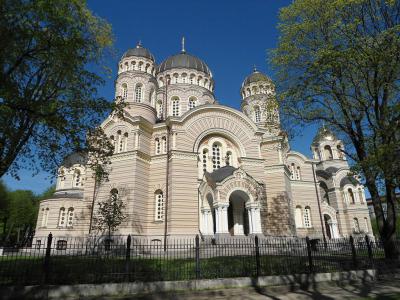 Cathedral of the Nativity of Christ, Riga (must see)

The Cathedral of the Nativity of Christ, also known as simply the Russian Orthodox Cathedral, is a Neo-Byzantine church designed by architect R.Phlug. The cathedral is considered to be the largest orthodox temple in the Baltic region and was erected with the blessing of Alexander II, the Tsar of Russia, between 1876 and 1883. The church features five domes with florid decorations on the exterior, while its interior is embellished with traditional icons, painted by Vasily Vereshchagin, and numerous gold plated items.

Two world wars had their toll on the building. During WWI, when Latvia was under the German occupation, the cathedral was converted into a Lutheran church. In 1918, it was given back to the Russians and, even though the local government wanted to impose Latvian as the main language for religious rituals, the cathedral’s masses were still held in Russian. During World War II, the cathedral was damaged both on the outside and inside, and in the 1960s it was closed down completely, transformed into a planetarium, with its interior refurbished and split into two levels. The upper floor held a scale model of the universe, while the lower was taken up by a conference hall and café.

In 1991, the cathedral was returned to its rightful owners, the Orthodox Russian Church. Since then there has been a profound restoration performed. Today, the building fully resembles the original 1883 look and is used for religious services again.
Image by Dezidor on Wikimedia under Creative Commons License.